TUESDAY QUOTE OF THE WEEK CLXXXVI

FINDING TRUTH WHEREVER IT MAY BE FOUND: “’. 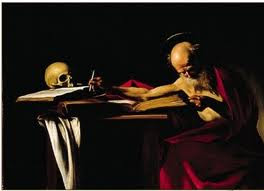 ‘Well, it will have helped us to feel that we behaved decently till the end. And much more, it will have helped people everywhere, who will be saved for the righteous few among them, as it says in the Bible. Of course, Quangel, it would have been a hundred times better if we’d had someone who could have told us such and such is what you have to do; our plan is this and this. But if there had been such a man in Germany, then Hitler would never have come to power in 1933. As it was, we all acted alone, we were caught alone, and every one of us will have to die alone. But that doesn’t mean that we ARE alone, Quangel, or that our deaths will be in vain. Nothing in this world is done in vain, and since we are fighting for justice against brutality, we are bound to prevail in the end.’

‘And what good will that do us, down in our graves?’

‘Quangel, I ask you! Would you rather live for an unjust cause than die for a just one?’” from Hans Fallada's, "Every Man Dies Alone"

Speaking of such things, at our last meeting of the G. K. Chesterton Society we got on the topic of momento mori or "remember death." M found this from St. Mienrad's Abbey we you can preorder your casket. "It appears that you can order them ahead of time ("If the casket is not to be used immediately, the purchaser is responsible for its care,just as one would care for any fine wood furnishing.") Talk about memento mori: put one of these in the living room!"

The Diocese of Cleveland Enewsletter reports, "The closing of St. Emeric parish in Cleveland on June 30th signaled the completion of one phase of the reconfiguration process involving 50 churches across the eight counties of the Diocese." It goes on to report that parish closings are only the beginning for the Vibrant Parish Life Initiative. Read more here.

Wayne sent in this cool site for Catholic T-shirts. Lots of quotes from Chesterton. They LOOK like the shirts younger, "hipper" people than me are wearing, but they the messages are far better. Thanks Wayne. 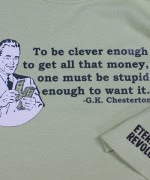 Ellen, who often pops by when we have a Chesterton event writes, "Dale Ahlquist told us at the Annual Conference last weekend that the next conferences will be in St. Louis, Reno, and San Antonio! He hasnt forgotten Cleveland, but it looks like it will be awhile before we can expect to be a venue." Looks like we have plenty of time to prepare. Thanks Ellen.

Someone wrote to ask if anyone can come to a Chesterton meeting. If you like Chesterton just go to the Chesterton picture to your right to see the readings and date of the next meeting.

Email ThisBlogThis!Share to TwitterShare to FacebookShare to Pinterest
Labels: Monday Diary, Quote of the Week

"It appears that you can order them ahead of time ("If the casket is not to be used immediately, the purchaser is responsible for its care,just as one would care for any fine wood furnishing.") Talk about memento mori: put one of these in the living room!"

"Not one glance of compassion, not one commiserating reflection that I can find throughout his book, has he bestowed on those who lingered out the most wretched of lives, a life without hope in the most miserable of prisons. It is painful to behold a man employing his talents to corrupt himself. Nature has been kinder to Mr. Burke than he is to her. He is not affected by the reality of distress touching his heart, but by the showy resemblance of it striking his imagination. He pities the plumage, but forgets the dying bird. Accustomed to kiss the aristocratical hand that hath purloined him from himself, he degenerates into a composition of art, and the genuine soul of nature forsakes him. His hero or his heroine must be a tragedy-victim expiring in show, and not the real prisoner of misery, sliding into death in the silence of a dungeon."

- The Rights of Man

"And much more, it will have helped people everywhere, who will be saved for the righteous few among them, as it says in the Bible."

If St. Peter Basilica in the Vatican is the second largest in Christianity, what is the largest?

Our Lady of Peace - Ivory Coast

Speaking of caskets . . . . the monks at New Melleray Abbey in Iowa make a fine casket . . . I recently ordered one for my wife on the day that she died, and it was at the funeral home in Akron the next day . . . . FedEx