TUESDAY QUOTE OF THE WEEK LXXX

FINDING TRUTH WHEREVER IT MAY BE FOUND - “If you continue in my word, you will know the truth and the truth shall make you odd.” Flannery O'Conner

So, I was sitting in my office when I heard a noise from my childhood. I knew what that dull roar, which was so different than anything else, was. I tore out of there to see a perfect view of the blimp floating past the bell tower of Saint Sebastian. It would have made a perfect picture had I my camera with me but alas and alak I did not. I shot back into the house, found the thing, but even at lightning speed, by the time I was back out the blimp had gone quite a distance. But here is a picture none-the-less. 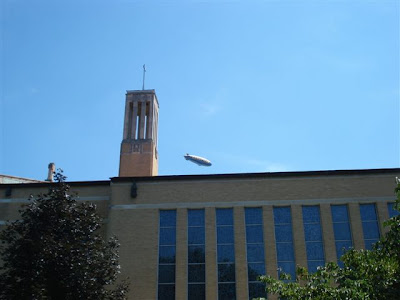 When I came to Saint Sebastian the bishop said, "Just don't end up on the front page of the Beacon Journal" or some such thing. I did however end up several sections in. Here is a link of you care to see. Thanks to St. Paul Today for helping me find it.

The Diocese of Cleveland Enewsletter says that this is the last week to see the Vatican Splendors exhibit here! If you have not been there yet - GO!

B. wrote in to say her daughter who is a relatively new member of the Sisters of Life in New York have a blog about their experience at World Youth Day in Australia.

I. E. forwarded this message, "Have you ever heard of the World Meeting of Families? It's a world youth day for families of sorts. John Paul II initiated them in during the Year of the Family in 1994 and they have been held every three years since then. The last one was in Valencia in '06 and Benedict scheduled the next one to be held in Mexico City in January of 2009. The whole thing doesn't seem to be getting a whole lot of publicity (naturally) so I'm trying to do my part in promoting it. The official web site is http://www.wmf2009.com/ please check it out and consider going." 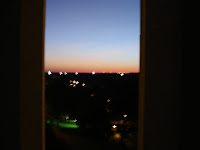 Saint Sebastian for the 4:30 Mass. I find him to be a brilliant homilist and hope he will return here often. (The Masses are piped in to the rectory and I had the pleasure 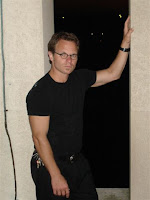 of hearing his latest proclamation at the dining room table.) After Mass we had the opportunity to dine together and then decided to take dessert up into the bell tower and watch the sun set. As great as my camera is it did not do justice to the colorful sky nor could I get Father and the sunset in the same picture so here is one of each.
Posted by Fr. V at 1:20:00 PM

Great article, and perfect quote: 'to get to heaven as a priest, i must work to get others there!'

Yep, that's the priesthood in a nutshell, and it is a wonderful thing!

How do you get photos (or any image) spaced throughout your post? Every time I try Blogger just lines them up one after the other.

Rob: You have go into the html tab to edit the picture, cut and paste it to where you want it.

I'm not sure if we are talking about the same thing - BUT - I just plug in "left, right, or middle," select a size, and then when it is there on the compose (not html - though Dawn Eden taught me to do it that way and I found it WAY too confusing) just click and drag. Click twice and then to move it down the post you almost have to drag it off the post screen.

You can click and drag the image? Wow, thanks, didn't know that!

Father, as good as Fr. Ference's homily was, yours are even better--though we 4:30'ers haven't had the pleasure of hearing one of your homilies in AGES (hint, hint).

All the pics from the bell tower are killing me. I'll sign a waiver (even listing the parish as my beneficiary should anything happen) to get a chance to get up there.

Me too...a chance to go up to the top of the bell tower!
You did say that it wasn't safe for recreational climbing so.....be careful ....we want you here a long time!!!
Your homily was great on Sunday! Isn't there a way that you could tape them and put them on the parish website so that we could listen again or those who missed you could listen?
Thanks!

Me too ... What a great view
I agree, my family got more out of that homily than many from past Masses We actually talked about on and off the rest of the weekend

You couldn't get me up there even if you offered to pay off my student loans and put me through grad school.

Oh, it's beautiful up there! Granted, climbing the rusty ladders is challenging, especially considering the place is a spider lair...but still! Totally worth it!

Fr. V.,
About putting the homilies on the website, it's a good idea. Will you consider it?

To tell the truth - I know that there is a way - I'm just not sure how to do it. We have the capability to record but how gets from there to podcast - I have no idea. Is someone up to a new parish ministry???

And for that matter - anybody interested in repairing the ladder so that we can let you guys up???

Rob and Adoro - I can't beleive I have given anybody advice about a computer!! Thanks for the opportunity to feel like a computer geek today - it won't last long.

And thank you Father. Any plans to stop up this way again? That vestment is still waiting to be used by you . . .

Fr. V.,
They put the homilies on the web at our neighboring parish on West Market, maybe someone there can let us know how, maybe Fr Joe W. knows.
It took me a while just to figure this out so I won't be much help in the computer area! :(
Thanks for considering it.....
Also, hope someone works on that ladder so you can let us girls up too! :)
Thanks

I just wanna say I would LOVE to hear your homilies. It's not like I get a chance to just drop by! (Well..maybe if I got into skydiving and convinced the pilot to drop me off in Akron instead of a field in Wisconsin...)

Hey Father, what was the subject of this wonderful homily that everyone was talking about?

If you have an ipod (not one of the little uns a regular sized un) there is an attachment that lets you record you can get it just about anywhere then you can upload it to itunes. and I think (not 100% here) you can then embed it on your blog or just link to the itunes thingie. It worked for me a while back, don't know if it will still work...

yes I know uns and thingie aren't real words but if you had my Job right now... your brain would be dead too. Ok, Ok, if you had my 3 jobs I am doing at work,,,

It was on Theology of the Body essentially.

I think I need to talk to someone who understands podcasting.

Apperently you can't upload to itunes anymore (see how long its been) you can use a free program like thisL http://www.recordforall.com/download-recordforall.htm

to record what ever you want to straight from your computer microphone and/or add audio clips however you want. It is pretty simple you may still need to find a host site for your pod casts such as: http://www.switchpod.com/ or http://www.podbean.com/ you can then submit it to itunes via a link or put it on your blog.

thats just the free stuff. The only reason I know about it is because of work and developing more stuff for me to do.