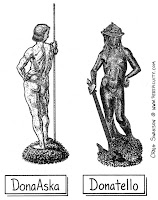 An interesting book I a reading right now talks about how some people are so into their electronic relationships that they actually suffer from touch deprivation. How odd for a Catholic since the practice of our faith is so built on touch. The sacraments themselves require some amount of person to person contact. Confession cannot be over the phone. Baptism requires that the minister physically pour water on you (or dunk you) and anointing requires that he trace a cross on your forehead and the palms of your hands.

Do you remember that scene from the DiCaprio movie “Man in the Iron Mask”? After all those years of wearing the mask they finally went to remove it and he grasped for it. You would think that he would want nothing more than to get that darn thing off of his head. But after years of wearing it the unexpected aspect of removing it must have felt like they were going to remove a part of him. Oddly, it eventually gave him some amount of security. Would it be possible for touch deprivation to become the norm and for people to be appalled at the prospect of having the bishop place Chrism on their forehead during confirmation?

ch other. And this was before the Church scandal. Since then the same rules have been reiterated in more strong terms officially along with the after thought, “But we do not want you to be afraid of kids!” which caused priests to glance at each other and say, “Yeah right.”

So this past week you probably saw the article in the paper about the bishop in Cincinnati and his new proposal for his priests that comes very close to the first three rules mentioned above. (Though if any moron is still tickling or kissing kids I doubt a rule will stop it at this point.)

s. Then with one hand I pat them on the head and say, “Thank you” and extricate myself. I may find the situation sad, but not unnecessary. This is just a weird time. After the ‘70s call for priests to “get down with the people” we seem to be setting up all the walls and pedestals again ushering in a new pseudo-Victorian age though not out of propriety or (over the top) respect for the priesthood, but because there is always the threat of a lawsuit in the wings.

Sad to say, here is not a solution, just an observation. This is where we are. Though we are fine and will be fine, I don’t think we are in Kansas anymore.

Ed, the hero of Monday’s story has an update after doing some research on the net. He said that these birds can suffer from narcolepsy when under stress. The bird may have not have been as overly distraught as we thought. He may have been in fact napping and receiving breakfast in bed!
Posted by Fr. V at 4:10:00 PM

All this come down to the laity, too. As DRE I had to have Father bill install windows in all the classroom doors at church and my teachers were forbidden to give a ride to a single kid.

The saddest part of this is not all accusations are legitimate and the kids know they have a certain amount of power. That children should be so worldly is sad, sad, sad.

hm...the priests at my church dole out lots of hugs. i guess not so much too children, unless they know them well

Well, handshakes are still an acceptable form of touch in our society. Children have to learn good manners some time, so let's use this "no touching" rule as a teaching opportunity.

I see lots of kids coming out of nowhere and bowling our priests over, although they are careful in their response. None are partuclarly "huggy" people (I'm not, either. Among good friends, yes, but you know those parishes that have a hug fest during the "sign of peace"? Yeah. Not a fan.)

Anyway, as I work in a church, that's something I think more of, too, than I would in any other venue. I had to meet with a student last year, one who had been kicked out of class. I didn't even take him back to my office, which is in a corner, but had our conversation sitting in front of the glass door. No one else was in the office at the time, and THAT made me nervous, even though everyone knew we were there and there was a lot of traffic in the hallway. Becuase it only takes an accusation, and if you work for the Church especially, you're automatically guilty. Never mind "due process". Even if you are exonerated, the viscious rumor mill hangs everyone without a trial.

A couple years ago I had an evening appointment with a priest at my parish, and we went into his office, separated by a desk. Suddenly he stood up and suggested we go to the conference room because, he said, no one else was back there and the conference room was visible from the lobby. He said, "Don't take this wrong...it's not that I don't trust you...it's that I don't trust you. And you shouldn't trust me, either."

And I totally knew what he was saying. It made me so sad. I'm all for being careful, but "careful" has turned into paranoia, and the worst part of it...in this day and age the paranoia is NECESSARY.

There is a fine line between careful and paranoia, and I understand the paranoia. As one priest friend said to me "This is my whole life, one accusation even though it would be false, would force me to give up my life and I don't know what I would do".

He, sadly, has a point what would he do? He wouldn't be able to work with kids, do counseling or anything else he does that makes him who he is.

A little off the subject here, but think confession with the gratis screen still great, and can't stand all the kids forced-penance services that include coerced face-to-face. The rite is clear that a screen should be available . . . we don't always take that to heart. (It certainly avoids the touching issue.)

Billy Graham had a rule of never being alone with a female member of his congregation unless they were in his glass walled office. One false accusation or misinterpretation could destroy a person's life ala what happened to Kelly Michaels or the Wenatache case.

And in actuallity the law has been changed. There is no longer the right to go face to face. The priest has first right of refusal now and can make the screen mandatory for his confessions just to put aside every suggestion of impropriaty. Or he may open it up. Just another example of returning to former practices and for not nice reasons.

Is there a citation for that?
Like giving both choices to all penitents. Interesting that there is a change.

I just wish there were chairs both sides (face to face and screen) usually it is only when it is face to face there is a chair. When you have bad knees coupled with MS... sometimes it takes the choice away. Especially if you get a "wordy" priest or more often then not in my case you have A LOT to confess... falling out of the confessional not very dignified. So Fr.'s out there if I can offer a suggestion, put a chair on the other side too so those with disabilities can have the screen side option as well as those who can actually kneel.

I know that for myself, if people come into my office, my doors are open.

I'm glad more priests have been refusing face to face confession. My confessor doesn't allow such things to happen.