Poor Mom. When we got to the house she was so tired she could scarcely stand up. And it was only early afternoon and there wa 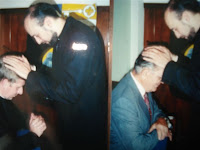 s a long night ahead of us. There was time for some recouping but soon we were off to the Domovina Club, a place my grandfather helped begin. When we walked in the party was already in swing and we were greeted with applause. There was a kneeler on an oriental rug in the corner and I spent most of my time greeting guests and giving first blessings.

There was a blessed break when the meal was served. It was a very traditional Slovenian meal and nothing in the world beats club chicken and Slovenian sausage. Apparently there is some insanely guarded secret to how the chicken is prepared. My sister Lori took one of the cooks aside and tried to ascertain the recipe and it was whispered in her ear. Later we tried to pry it out of my sister but her lips held firm. She finally let go with one secret though. But I cannot tell you.

When dinner was over my Uncle Frank Spetich’s band began to play. Late into the evening I snuck out with three friends for a walk around the block. The friends sound like a set for a joke: a Mormon, a Unitarian Universalist minister, and a Catholic who played a role in my going into the seminary in the first place. Away from the noise and commotion we slowly walked around the block in the cool night air and talked. It was a wonderful break. 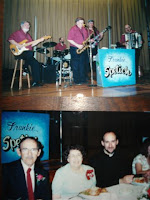 Coming around the corner where the hall was, the sounds of talking, laughter, and music slowly drifted back in our ears and soon we were engulfed in people once again. They had begun singing hymns in Slovenian in four part harmony in the bar which reminds me of one of my favorite quotes, “Like a tenor in a bar, it’s never time to go home.” But home we finally did go though late into the night. Waltzes and Polkas still in our ears, kind faces in our dreams, and I was a priest. It was all too much to grasp. Sometimes it still is.
For those of you so kind to keep reading. I will reveal one of the secrets of the chicken. Apparently one of the old-time cooks, late of our company, would walk in and sprikle a secret concoction contained in a brown paper bag. It seems that secret died with her. The chicken is still fabulous however and one of the secrets that was passed on to my sister was to use "Better Than Bullion." It adds a whole depth of flavor to any meal. Trust me. But it is difficult to find. Good luck.
Posted by Fr. V at 12:49:00 PM

What!? And you didn't make this fabulous chicken for us last weekend?

Beautiful memory, Father. Thanks for sharing it.

Thanks for sharing, I think these are some of my favorite posts.

I remember going to the ballroom there as a little kid for Christmas parties and coming home with all kinds of Christmas gifts. Plus as a teenager(18) getting a goldfish bowl of draft Hudephol(Brewers of Little Kings Cream Ale) for $.23 plus tax in the bar in the basement.
And in the bar(which was next to the bowling alley-even had a peephole to see if you were a member) they had a bowling machine with little hard rubber balls to fling down the minature alley.