MONDAY DIARY: ALMOST EXCRUCIATINGLY TRUE STORIES: IT'S A CURSE I TELL YOU! 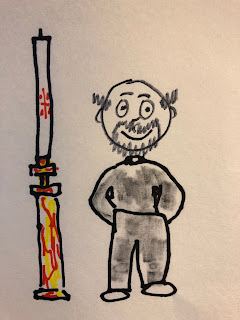 We have a really nice Paschal Candle stand.  It was designed specifically for our parish by the architect who designed all of our buildings going back to 1928.  It was created to go with the "new church" whose cornerstone was laid in 1958.  It still looks pretty good except that for the last 10 years (the entire time that I have been here) its shine has been dull (due to time) and there has been a crook in the stem making it look like this from the side: 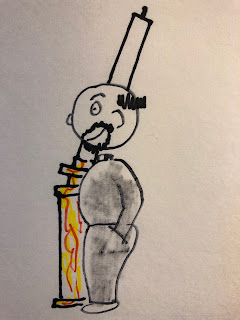 It's all Leaning Tower of Pisa-ish so one had to be careful how the base was placed in the sanctuary so that it leaned backwards and nobody could tell that it was at a slant.

Then this year for our 90th anniversary we had it fixed!  It was buffed up and was all shiny and new looking and a machinist fixed the bend so that it stood straight and tall.  And then this happened: 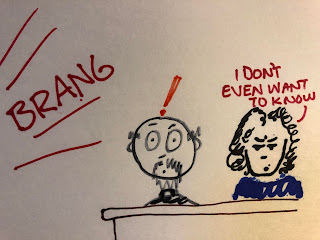 For ten years, nobody so much as bumped the candle stand.  Then, right after Easter, in an accident that could happen to anybody (don't worry, I still love you - I'm just having fun) it was dropped and the holder part broke in two.

This is tricky because the rubrics call for an Easter candle a lot.  We needed it for baptisms that day and so Cathy S. stood in as a candle stand for a whole baptism: 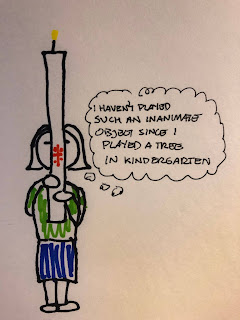 BUT!  Thank goodness - the repair was easily made and we had our candle back until after the 10:00AM Mass this past Sunday: 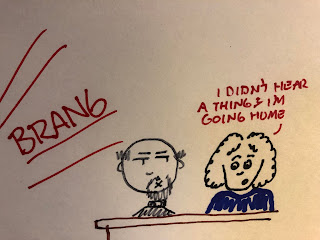 FOR TEN YEARS that stand stood there and nobody so much as breathed on it wrong.  We get it fixed up and it already has been broken twice within one Easter season.

BUT THIS IS NOT UNUSUAL:  The paten on my chalice looks like an old 33 and third that his been sitting in a car in the hot sun for several days.  "Don't leave your records in the sun, son.  They'll warp and they won't be good to anyone" - so goes the song.  For years servers carried them without incident and when I had it replated they started dropping it as though it were a live fish coated in oil on steroids.

Maybe God doesn't like shiny, flawless things.  It DOES make sense.  He does love US after all.  Right?

Just the same, we will give it one more try: 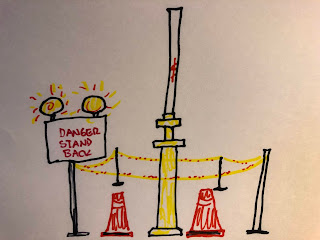 Cathy S is truly a dedicated DRE, a faithful parishioner, and a fine candle stand! God bless all our good cluster neighbors at St. Sebastian! - Sue from St. B