MONDAY DIARY: ALMOST EXCRUCIATINGLY TRUE STORIES: GETTING RID OF MICE IS A SNAP 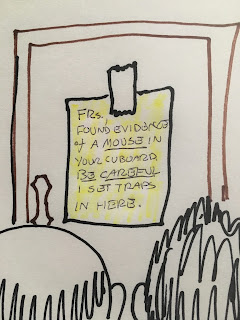 So apparently we had mice in the rectory.  Marcy brought us over some food and went to put it in the cupboard (misspelled above but I didn't want to redraw it) and saw evidence that a mouse had been in there.  She cleaned it up and put a FEW mouse traps in there with a warning to be careful when reaching in there blindly for some ValueTime cheese curls or something.

So fine.  That was that.  Then we had a few people over to celebrate a birthday when this happened: 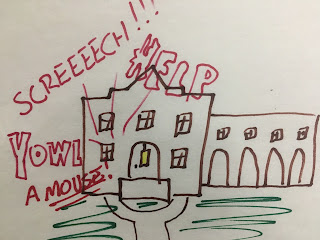 All this fuss about a cute, defenseless tiny grey mouse that was simply walking across the basement floor.

As it turns out, the Franciscan spirituality only goes so far around here and we were given more traps to set out.  So we used up the remains of a jar of peanut butter and set some more traps around the house.  We put them in very strategic places so that the dogs could not get to them.

UNFORTUNATELY while I was gone on Wednesday, the carpets in the house were cleaned.  The cleaners did a fine job but as part of their cleaning, they moved furniture, stacked things on couches and beds and tables.  It took a little while when we were in the basement to think, "Oh dear, that means something bad for the dogs."  At just that moment, Sebastian started digging behind a table.  Almost at the same time I started yelling, "Sebastian!  No!" there was a SNAP! 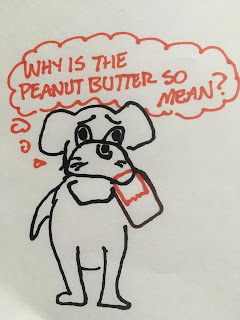 Oh, our poor, dear Sebastian! What a painful thing to happen to such a sweet boy! If only someone would feed him once in a while! ;)

Happy hunting, and Blessed Advent to you and all our cluster neighbors at Saint Sebastian's! - Sue, OFS (from St. B)

Is it a sin to kill mice? Because that's what I'm doing with the traps in my kitchen.

Oh no! If only someone would give you some highly effective no kill Tomkat Live Catch traps to use.