I do enjoy being a pastor. I wouldn’t trade it for the world. But even the best of jobs can have their tedious side. But amidst the usual brouhaha and costmary emergencies are always some distractions that add spice to the

One example was in speaking to priest friends from around the world. The priest reported earlier to you from India told me of his first experience of snow in Akron. He walked outside and saw this white matter falling from the sky and assumed that there was a fire somewhere and the ashes were falling over the parish grounds. When they started falling at an alarming rate it occurred to him that it would be this thing called snow.

The priest from Barcelona went with a walk with Sebastian, Fr. P and I and we came across a garage sale. This was the most interesting thing to him. “Are they always open? Is it like a store? This is just excess stuff that they have that they SELL?” On our second walk the next week he asked, “Will there be any garage sales today?” I think he is addicted.

Our choir was in the WCLV Jubilation choir competition which was held at our cathedral church of St. John. The purpose of the contest is to promote quality Church music from classical to modern and to recognize the fine choirs of north east Ohio from all denominations. St. Sebastian was one of the six finalists this year.

I was late getting to the contest and crept into the cathedral. Our bishop, bishop Lennon was sitting there and greeted me and asked if I would like to sneak down to the bowels of the cathedral building to let the choir know that I was there. We wound our way through the maze of the basement until we came to the room in which the choir was preparing. We prayed together and I gave them a blessing after which I said, “I’d have the bishop bless you too but that might be considere

Back through the maze we found ourselves once again in the back of the cathedral. (It was swell of the bishop to perform that kindness.) I sat down and listened to other choirs. There was no clapping since the contest was performed live on the air. When the choir before us finished a man stood and waved his finger in the air giving us permission to applaud and the announcer, a smooth speaking man with a deep voice made some announcements and then said “And now back to the WCLV studios. The 2010 Jubilation Choir Competition will resume in about ten minutes.” And with that we were given permission to talk and move about.

Our choir then started to take its place at the front of the sanctuary. We were one of the largest choirs there and as a matter of fact they can no longer where our robes (which are getting quite old as it is) because had grown so large in numbers. We were ushered back to our seats and after some brief remarks by the announcers the choir was introduced, “. . .under the direction of Lynn M. Fry-Steward” and the choir began, “And the glory, the glory of the Lord . . .” from Handel’s Messiah. They also performed “Lacrymosa for Mozart’s Requiem, “Ubi Caritas” by Maurice Durfle, and “Arise, Your Light Has Come” by David Danner. At the end when the man waved his hand in the air the cathedral broke out in thunderous applause! It was a thrilling night.

In the end we did not win first placed (but just being there was an honor) but IMHO I think one would be hard pressed to say that anyone else came as close as we.

The other interesting thing that happened was that my ceiling in my room started leaking. We had a heavy downpour on Saturday just as we were getting ready for our International Festival. I remember listening to the rain and thinking, “Why does it sound like it is closer than it should be?” Sure enough water was gushing in. The cabinet in which the TV sat had a quarter of an inch of water trapped in the top. (Thank goodness is was well built enough not to let it soak down onto the TV!) I put buckets out and went to the festival for a few minutes. 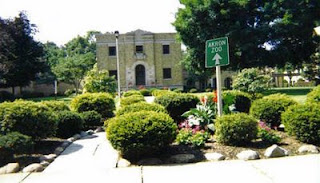 Then it was time to go up on the roof and see what was what. I gentleman from the parish volunteered to help and we dug out a latter. I did not want to waste his time and so chucking my cassock went about the business in dress pants and white shirt with cufflinks. Mom would have been furious. We put the ladder up to one roof and got that high, pulled the ladder up and reached the level of the second roof. Finally we hauled ourselves up to the top roof and found inches deep in water. The interesting part was that once up there we discovered the trap door that is right over the back steps. We really only needed a step ladder. We could have just used the stairs the rest of the way. Anyway the drains had plugged! We unplugged the drains and the water rushing down them sounded like jet engines.

Then it was time to go back down. We had not used the ladder to get up to the third roof but scaled the wall. Funny how much more difficult it seemed trying to get back down. Down seems like such an easy direction. In any event I had been very successful in keeping mostly clean but the effort of climbing back down ended with a big green smear – of course on my white shirt.

Well that was the excitement from St. Sebastian this week. Sorry it was so long.
Posted by Fr. V at 7:21:00 AM

". . . In any event I had been very successful in keeping mostly clean but the effort of climbing back down ended with a big green smear – of course on my white shirt."

It's not easy being green.

LOL! You're still using the "Akron Zoo" pic I sent you!

I never realized it would come in handy for so many things! :-D