I came in from taking Sebastian from his morning walk. It was a beautiful winter day with lots of snow. Not just any kind of snow mind you, but great, thick packing snow. Sebastian got his morning treat and I my breakfast and we settled into the breakfast room. Fr. Pfeiffer was there reading the morning Diversions and made comment about one of the comics concerning some kids who got into their mother’s closet and used her clothes to dress their snowmen – er – make that snowwomen. 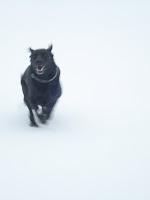 “Hey,” I said, “we have that old, tiny cassock downstairs. Why don’t we make a snowpriest?”

What a hoot it seemed it would be; our snowpriest standing in front of the rectory welcoming visitors and giving his benediction to passers by. So we dressed warmly, grabbed the cassock and Sebastian and went outside.

Slowly we built up the snow man. We couldn’t just roll giant snow balls because then it would be too fat to the cassock around. But the snow was perfect packing snow and we were able to build up a thin enough snow man to get its robes on. A head was stuck on top using left over, old, rock-hard brownies for eyes and nose. Branches acted as arms and held up the sleeves. Fr. P donated a hat. Fr. Snowman was done! We took a few steps back and said, “Well . . . hmmm . . . looks kind of creepy.” 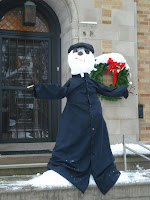 A lady stopped us after Mass later in the day. “Um,” she began cautiously, “Did you build a snowman in your front yard?”

“It kind of looks like a witch. It kind of creeped me out.”

St. Sebastian rectory now has a bare, skinny pile of snow sticking up in front of the rectory.

Oh, I love Frosty the Clerical Snowman. Too bad his parish assignment was such a short one.

On a similar note, I thought it would be clever this year to engineer a Christmas card that, when the recipient opened the envelope, a 3-D box that looked like a present would pop out. My best protype kinda slumped out of the envelope looking like a sagging block of tofu.

LOL!! At least I am referred to as "a lady." And, I saw it after the eyes and hat melted off. Creeped the dogs out, too.

The picture looks Great! I am sure that the melting was disastrous!
May his snowlu soul rest in peace!

That is both funny and clever. I'm sorry I didn't see it. I probably would have assumed it was an eigtht grade plank and would be expecting a call from school!

I loved it Father! I have zero artistic skills, so my snowmen always looked like something from the Friday the 13th movies. Once my kids got old enough, i happily moved into the background and was the slave labor to gather snow and let them shape it into a snowman that was less menacing.

Have you never heard of the Italian tradition of "the Christmas Witch?"

La Befana is an old woman in Italian folklore who delivers gifts to children throughout Italy on Epiphany Eve (the night of January 5th) in a similar way to Saint Nicholas or Santa Claus. This Italian gift-giving spirit is also known as Saint Befana, La Vecchia (the Old), and La Strega (the Witch).

The character may have originated in central Italy, then spread as a tradition to the rest of Italy.
A popular belief is that her name derives from the Feast of Epiphany or in Italian, "La Festa dell'Epifania."

We passed the rectory on Saturday morning and I had to stop the van since I was laughing so hard.

It was worth the effort to cause so much mirth - and yes - the cookies helped.