Q: WHAT DO DISHWASHING MACHINES AND MANGER SCENES HAVE IN COMMON?

A: There is my way of setting them up and the wrong way.

O come on! You know that it's true. Everybody has their opinions on the correct way of setting up the manger scene. There is your way and the wrong way. That’s it. I’ve set up too many manger scenes in too many churches with too many committees to not know that this is true. Fortunately for me the way I do it is really correct.

This occurred to me the other day as I was standing at the entrance of the Church waiting for a person to show up and noticed one of the small manger sets in our lobby. The numerous manger manglings were unbearable. Immediately I, in my secret role as Monsignor Manners, set about rescuing the poor statues from their embarrassing plights. Could you imagine knowing that you are improperly placed and have no way of stirring? The dishonor of it all. St. Francis would be appalled. 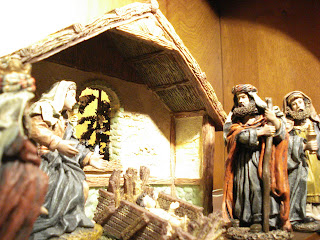 The most heinous of all crèche transgressions is the ignoring of the stare. What is there to see here people? Jesus! Yet how many manger scenes have you seen where people have set the figures in places where they look good rather than focusing on the guest of honor? This is a moment of worship, not a barn party. Wrapped in newspaper for 11 months the figures finally escape from their out of season confinement to be set in the manger scene staring at some hay or the foot of some shepherd or something. “Jesus is just three inches over to the left. If only somebody would come by and knock the table a little so that I could see him! That is what I was made to do! Oh the iniquity of it all.”

That goes for the animals too! Yes! The ox and the ass are actually interested in the baby Jesus. If you find that they spoil the scene being too close to Jesus leave them in the box. They will not even know Christmas is come in gone. Their animals they can’t tell time.

The one exception is sheep. Sheep can do whatever you want them to. Some of them are eating anyway. (They will be the ones on the left at the second coming.) I do have a weakness for letting one eat the hay out of Jesus’ crib though. Sheep are known to be stupid so they can get away with it. Camels can also do whatever they want. Let them have fun. They’re the first piece that breaks anyway.

Kings have a certain way of standing. You can’t force them to fit your idea of all facing the same way from the same direction. Don’t blame me, blame the artist. Take the king that is kneeling. You know the one I mean. The one that looks like he is saying, 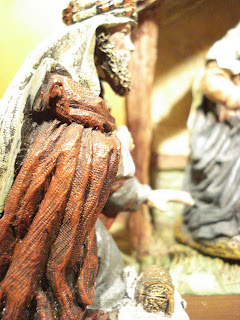 "If you can grab this gold before I do, you can have it."

He has one way of kneeling. The artist spent some time trying to figure out how to get him to kneel toward the baby Jesus without completely turning his back on everybody. Don’t make the artist sad.

Absolutely forbidden under penalty of reserved sin that can only be forgiven by the pope himself is the placing of the Three Kings across the room and have them slowly move toward the manger on the days between Christmas and Epiphany. I mean, come on. Let us be reasonable. The kneeling king did not crawl to Bethlehem on his knees.

I was once at a parish that had two camels both of which were laying down and did the travel thing. Apparently they CRAWLED all the way from the East. Now those are mighty pious camels.

Also, let him be anathema who puts Saint Nicholas in the manger scene. Even those who live in Akron, from when we get the word AnAkronism may not do this for reasons too numerous to mention.

Lastly – ditch the snow. THERE WAS NO SNOW. Or, if you prefer, knit little hats and gloves for all the figures, especially the shepherd and the guy who holds on to the camel who are near immodestly dressed as it is.

Of course these scrupulously correct directives only pertain to my world. Rules in your state may be different. But just the same I would not advise leaving me alone in a room in your home where there is a manger scene.

we'll all do it your way from now on

oh! and about that bridge i have for sale...

Our wise guys have traveled the perimeter of the dining room and half way around the living room. They are currently almost across the piano. Then they will have to traverse a few window sills and a book case to make it to the mantle in time for Epiphany!

Thank you, that made my morning! Our parish has a new manger scene this year, and it all looks lovely except the (adult) sheep are smaller than Baby Jesus. But I googled "miniature sheep" and yes, there really is an ancient breed of tiny sheep, so now I can stop worrying about it. Except the camel looks a bit small too, I wonder if.......
Hazel in Canada

My mom and dad live out of state and they took our childhood nativity scene with them. My parents are pack-rats who throw nothing away (with seven kids, who could blame them)and my mom has a tendency to add whatever figurine she can find to the scene. A couple years ago I was outraged..."Mom, there were no moose in Bethlehem!"

Is it just me, or it there some kind of universal law that if you have an ox, one of his horns has to be broken?

I totally agree with the dishwasher thing. That's the reason why when visiting a friend last night, I put dishes and glasses on the counter and let the host load the dishwasher. Occasionally, when my husband will try to help and load the dishwasher, I will reload when he isn't watching. Now I have to go check out my manger scene to make sure it is set up the official Fr. V way!!!

You could be left alone with our manger scene; all of the major players were glued to the floor of the manger! lol To liven things up a bit I introduced some farm animals which were not glued and the children used to have fun moving a hen around for me to find and put in its 'proper' place.

Our Magi are now on top of the TV and only have to scale down the book shelves - one of which is denuded of books in order to hold the manger - to arrive at the manger - they might just make it by the 6th.

About the camel and the magus kneeling while traveling across the room.. maybe it's like that old oregon trail game. Only you're not seeing the awesome 4-bit graphics of them walking during the journey. You're just seeing the end of each "day" when everyone's resting.

Wonder if Joseph forded the rivers or found ferries to ride?

I once read a novel in which one of the main characters grew up with a presepe and an unusual Christmas tradition. Each year, her father found her a new animal to add to the usual sheep, oxen, donkeys and camels, and he'd tell her a story about why the animal wanted to be there for the Birth of Jesus. By the time the character was an adult, they even had a Chinese dragon in their set.

Wow.. I missed this one. Um.. This was the first year I did not have baby Jesus in barn the whole time --I wanted to put Him in there for Christmas Eve. Yes, it looked like the adoring Mary and Joseph were marveling at the barn floor--. The animals were dull and listless behind them. Three completely unrealistic angels prayed to their left.. we're missing a Magi, and of the two remaining, one could hardly tell that the tall one is missing his head. Listen to me, Elmer's glue lets go after 5 years. I guess at the rate I'm going, I qualify for a Valenchek Firing Squad. But wait.. our parish priest asked us to fix Joseph's staff. Husband, a carpenter, couldn't fix it, so he made a new one based on the old one. It looks wonderful, and it'll last forever.. but it's a shepherd's crook. Joseph wasn't a shepherd. *sigh..