ODD CAUSE FOR HOPE

The news has been amazing lately.  There are extreme pro-abortion laws passing in some states.  Government (your) money proposed to teach boys how to be drag queens in libraries which is classified as “art.”  A local government working at closing a Catholic school for hiring teachers and teaching what the Church has always believed and taught.  The Olympics are apparently going to allow transgender (former?) men to compete against women.  And as you well know, it is far crazier than this out there.  Some of the things coming out in the news is the stuff that, when I was a kid, would have been thought ridiculous if used in a work of fiction. 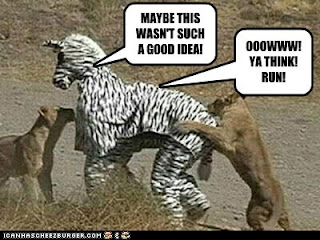 Now, hold on to your hats - I am not entirely sad about this radicalizing of these issues.  In fact, I hope that they continue to get wilder and more extreme.  As it has always been said, “The Devil will out himself.”  In other words, these types of movements are never satisfied with how they impact our culture.  They always stretch to the extreme and logic consequence, which tend to be destructive and deadly.  Eventually (and I believe that I will see it in my lifetime) society, having to cope with and clean up the mess being caused by our world right now will begin a radical (and I hope not too far) swing in the opposite direction.  There is my hope.
Posted by Fr. V at 9:23:00 AM

We were discussing the very same thing at our Secular Franciscan formation class last night, Father. It's like Whack-A-Mole. When we make some progress in one problem (abortion), the devil creates a crisis elsewhere (drag queen classes/drag queen library reading to children). And his nasty self always seems to target the most innocent - children - whether it is abortion or insinuating evil and immorality into the minds, eyes, and ears of small children. Maybe this is a result of so many parishes (including our good neighbors at St. Sebastian) reciting the St. Michael prayer at the end of Mass, imploring his help to fight the devil and all his evil influences.

It is also interesting to remember that Lucifer was the most beautiful angel, and he uses this to further his wicked agenda. Abortion "saves the life of the mother" and is "a woman's choice." Drag queens/homosexuals have the right to "love whomever they want", and "why shouldn't we allow them to marry? It isn't hurting anyone." And so on. Satan tries to make us feel guilty for having a well-formed conscience, and for performing a work of mercy by informing the uninformed that what they are doing is an offense to God.

God bless and protect all of us from evil at St. Sebastian, St. Vincent, St. Mary, and St. Bernard - Sue from St.

Logic and reality are on our side.

"Gender is fluid." But try to seek counseling to be rid of unwanted same-sex attraction. Nope! Can't do that. Same sex attraction is in-born and immutable. Well, which is it?

I guess we can fight about "gender" versus biological sex.

So many contradictions exist nowadays that almost no one can successfully navigate all the political correctness needed in order to make a simple statement that won't bring them trouble on the internet.

You offer a hopeful and most probable consequence to the wanton wickedness of our time, Father. Much of the harm to Western civilization has occurred over the last half-century in an atmosphere of go-along-to-get-along collaboration with incremental cultural deterioration. Today, the mask is off and even the willfully ignorant have difficulty deluded themselves as to the harm being done to our faith, families, and flag.
CS Lewis suggested this in the words of Screwtape: "Talk to him about moderation in all things. If you can once get him to the point of thinking that religion is all very well up to a point. you can feel quite happy about his soul. A moderated religion is as good for us as no religion at all-and more amusing.”
― C.S. Lewis, The Screwtape Letters

Wow! These are great comments. I wonder if a new dawn is just beginning to break.