MONDAY DIARY: ALMOST EXCRUCIATINGLY TRUE STORIES: THE AMAZING THINGS THAT YOU CANNOT DO WITHOUT LIPS 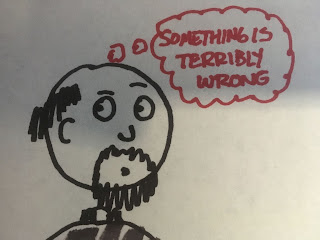 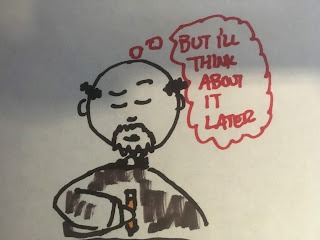 So on Tuesday I was at a restaurant eating something highly recommended by the waiter and thought to myself,  "Wow, I can't believe how cheap they were with this cheese.  It is almost tasteless!  How could he recommend this?"  Later I realized that it wasn't the cheese it was ME!  I had lost taste on the left side of my tongue.

Now, my first bite was extremely hot and I thought, "I must have burned my tongue."  But then the next day when I still couldn't taste, that was my first signal that something might be wrong.  Later that night I noticed I was having difficulties whistling and wondered if I was having a stroke.  So I did what all good Slovenian men do.  I decided to sleep on it and see if it would go away.  (Yes, I know, I've already been yelled at extensively by my N.Y. sister.)

By morning my smile was getting crooked.  But I really wanted to go to a funeral for the father of a friend but then my guardian angel whispered in my ear, "If you are having a stroke, do you really want to be the center of attention at somebody else's funeral?"

So I went to the ER.  To make a long story short, (too late), I was diagnosed with Bell's Palsy, a viral infection that causes you to temporarily lose muscle control on one side of your face.  It generally passes in a couple of months.  So essentially I have no facial expression on one side of my face. 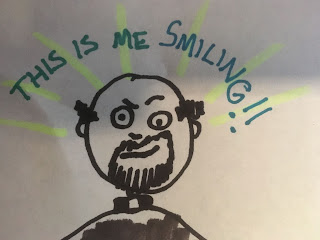 Yet another reason every man should grow his beard - for just such an emergency.  Between glasses and the beard it isn't too bad.

Unless I have to make a facial expression.

Which, at first, I thought wouldn't be so bad.  I can live with this if everyone else can.  THEN I REMEMBERED that this is the kick off of our 90th anniversary year of St. Sebastian Parish and because of that the number of photo opportunities that there will be including the shots for our PHOTO DIRECTORY that we were currently taking!  For the rest of history I am going to be remembered for looking more like our founding pastor, Monsignor Hilary Zwisler, who was NOT known for smiling: 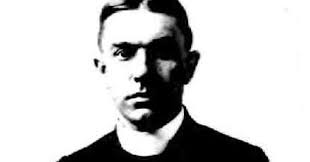 Anyway, I thought I could swing it without too much distraction until I woke up on Friday morning.  The dogs are always outside the door of my room and I always swing the door open and greet them with a hardy, "Good morning my good morning puppies!"  But this is what came out: 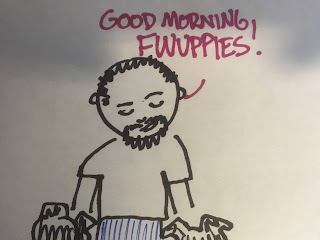 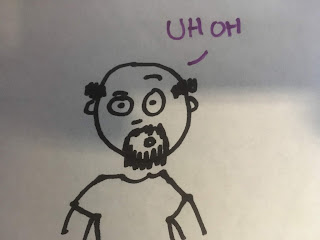 So the letter "P" is a challenge.  And this is where we come to understand that God has a sense of humor.  The Mass that day was for St. Peter and St. Paul.  And NORMALLY you would mention the saint's name MAYBE three times during the Mass.  But not Sts. Peter and Paul!  Nay!  Nay!  It seemed like EVERY OTHER BUMBLING WORD WAS PETER AND PAUL.  No kidding!  Here is the preface:

For by your providence
the blessed Apostles Peter and Paul bring us joy:
Peter, formost in confessing the faith,
Paul, its outstanding preacher,
Peter, who established the early Church from the remnant of Israel,
Paul, master and teacher of the Gentiles that you call. 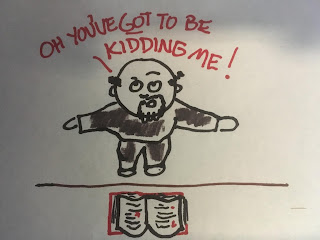 Wasn't that just too coincidental?  (!)  It was difficult for me not to laugh during the Mass though I dare say people might of though I was choking or something since my face would not match the noises I would be making.


Knowing that there were a lot of "P"s and not wanted to be a distraction, I told the people what had happened at the beginning of my homily instead of waiting until the end of Mass.  I was told later that when I said I was having difficulties with the letter "P" that someone thought I had said that I was having difficulties when I pee and thought it a little odd and inappropriate that I was talking about it during the homily.

Well, that's about it so far.  All is well.  If you have time for an extra prayer that would be great but other than that things are the way they are for now *BUT* there is one thing of which I would like for you to be aware: If you crack a joke or smile and wave, don't be upset that I don't seem to smile back: 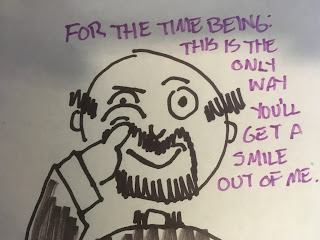 Prayers forthcoming for your recovery, Father.
(But, I did actually LOL at your post...)

I hope people get a laugh out of it - that would make some of it worthwhile. Thanks for writing!

So sorry you have to go through this, hope you feel better soon.
And, we'd all rather have a crooked smile than none at all.

For what it’s worth, it will likely go away and not leave you with residuals. Mine did. And I had to deliver a closing argument for a closing argument competition in Cleveland while I was recovering from my bout of BP, so I completely sympathize. But next time you get something like this, please stifle the Slovenian in you and GO TO THE DOCTOR. LIKE, NOW!!

Father, I am so glad you finally went to the doctor to find out what the trouble is. I am sure God wants you to stay well and healthy so that you can continue to do His work at St. Sebastian and beyond. It is not weakness, nor selfishness, to take a moment to look after yourself.

You may not fully realize it, but although you are a priest and dedicated to God's service, a lot of people care about you in addition to your dear sisters. I am not one of your parishioners, but we lay Catholics worry about our pastors and vicars. We notice when you are worried, or tired, or unwell. It is good that you let your parishioners know what was up with you, and that you understood they would draw their own (probably dire) conclusions if you did not tell them the truth. I know that probably infringes on your privacy, but it was thoughtful of you to let them know. For most of us, priests are family to their parishioners.

As a cluster neighbor from St. Bernard and friend of St. Sebastian Parish, I am glad to know this is not as serious as it could have been. God has plans for you, and we in Akron are grateful!

God bless and protect you and everyone at St. Sebastian!

You are all awesome! Thank you so much. As a annoying and troublesome as this is (and the are far, far worse things that could happen to a person) there has also been a lot of good that is coming out of it that I might not have realized otherwise including the thoughts and prayers of such great people.

Thank you & know of my prayers back.

Hi Father, both my father and my aunt had BP and both were back to normal within weeks. Hang in there!

Mine only lasted two weeks with no residual. I had to tape my eye closed at night, because it wouldn’t stay closed.

Three comments from the "peanut gallery", er pew!! 1. Your drawings are incredible! I don't know what made me laugh more, your self-effacing jokes or your AMAZING self-portraits!! You really could be a professional cartoonist, Fr. V!!! 2. A sense of humor gets one through all kinds of "physical challenges", good job!! 3. I am praying for your quick recovery and I am confidant your whole congregation is praying for your recovery. Because we absolutely adore you inside and out!!! God Bless!!