TUESDAY QUOTE OF THE WEEK CCLXXXVI

FINDING TRUTH WHEREVER IT MAY BE FOUND:  "History was being made behind closed doors.  It was undemocratic, it was nontransparent and it was wonderful.  The uncertainty and the apprehension in the crowded press room added to my delight.  The crowning touch was the chimney.  There was something marvelously surreal about an institution that announced the pope's death via an Email to news agencies, and two weeks later announced the election of his successor with a smoke signal."  from John Thavis' "The Vatican Diaries"
QUOTE II:  "'Latin is not difficult, friends.  It's not reserved for experts.  My God, every prostitute in ancient Rome spoke Latin,' he reminded anyone within earshot."  Same source

QUOTE III:  "The problem with quotes on the Internet is that you can't always be sure of their authenticity.” Abraham Lincoln (Thanks to Nan)
IN OTHER NEWS:
I wanted to know immediately when the pope was elected so that we could ring the bells and put up the bunting.  Fr. Pfeiffer told me about this site with a Pope Alarm!
Adam sent this article in:  Five Reasons to Kill Christian Music.  Excellent!  Thank you Adam.  At the top of the page you will also find a link to "The Catholic Church Young People Really Want."  That too is pretty good and reflects conversations that I have had with many young people.
This is a fundraiser from Imaginesisters.  It is one minute:


It concerns the film located here.

JP sent this pic in: 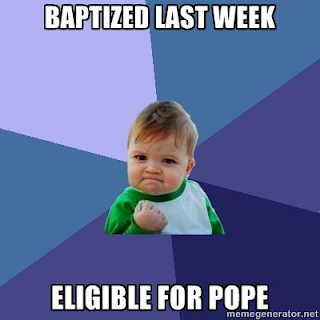 Fr. Damian has a new article on Word on Fire.  Read it here.

And this is why every Catholic in the world should have a say in who the next pope is.  (ThanksMW)
Posted by Fr. V at 7:04:00 AM

Yes, Anon, I agree. Quotes on the Internet are like statistics in the MSM.