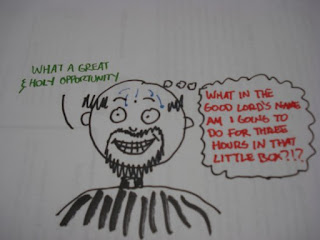 I will admit that although I was all for it, I was a bit nervous.  We are fortunate that so many people in this parish go to confession (or that people come here for confession.)  We have confessions three days a week, the Benedictines have them here every other Sunday, and Fr. Marty has his confessions here on Wednesdays.  That confessions 5 times a week.  And many, many times we go over the allotted times for confession.
Which is EXACTLY what made me apprehensive.  Would there be enough people to go to confession to fill three hour's time or would we be staring at the four corners of the confessional for most of it.
It's not that I haven't sat for that amount of time to hear confessions.  That happens often enough especially at large retreats.  But the difference is when those are done, you are done and you leave.  This night however we might hear 5 confessions the first half hour and then sit there in that tiny little box for the next two and a half hours without so much as a window to look out, counting the holes in the sound tiles after having said several rosaries.
And our confessionals were not built for people over 6'.  It is a lot like flying coach.  If I want to cross my legs I practically have to open my door to do it.  As Daffy Duck once said, "My dressing room is so small I have to go outside to change my mind."
Oh yes, I sound like a baby.  "Get over it," I hear some people saying.  But as Blaise Pasquale once said, "Most evil comes into the world because human beings cannot sit still in a chair for 30 minutes."  (Have you ever been in a doctor's office when he is running late?)  Along the same lines a priest once said, "To breathe 25 times without distraction: That's discipline!  That's freedom!"
So much for being the hero.
So I tool some stuff with me just in case: 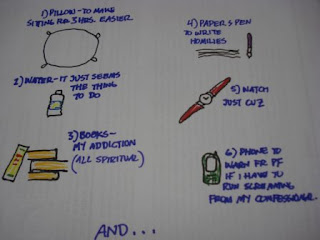 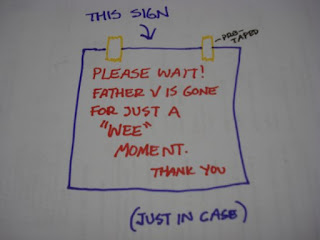 Then, like a good professional - I made sure that all of the equipment was in working order: 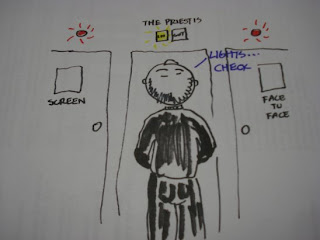 Then it was time to hunker down and get ready for whatever was coming. 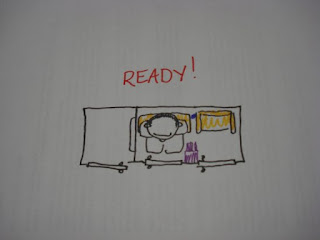 But you know what?  It was an AWESOME night!  From the moment our "vacant" lights came on until over three hours later we had solid lines of penitents (and we were cranking them out!)  Fortunately a priest friend came the last hour and helped us out so we were able to cut down the line some.  The confessions were great and it was an absolute success. 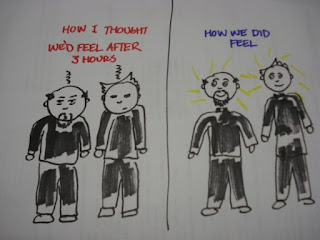 And I got some cool texts from other priests that night. 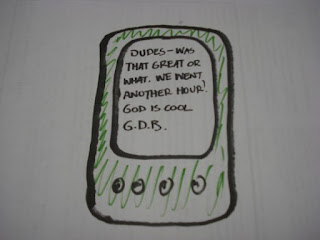 I am one of many non-parishioners who like to come to your parish for Confession. I was there a couple of Fridays ago, and I went to you face-to-face (the first time I had gone to Confession that way since I was in the 4th grade, 40 years ago). It was such a relief, and I cannot thank you enough.

I am so very grateful to you and Fr. Pfeiffer for your kindness in spending time listening to my sins, even though I am not your responsibility. Sometimes, especially when I have done something to offend my own pastor, I just cannot shove myself through the door of the confessional at my parish and ask him for forgiveness, and I am very thankful that you and Fr. Pfeiffer welcome sinners like me.

Thank you again for being so good to me, and for your awesome hospitality Friday night (seven of the children confirmed were from St. Bernard, my parish). You are all so very good to us, and I want you to know you are appreciated by your cluster partners.

Father, I don't mean to say this to inspire pride in you, but rather to give encouragement-

From my gradually-increasing experience, I KNOW a church/priest is good/solid/trustworthy when they offer confession more than once a week. (The more, the better!) I have never found this to not be the case.