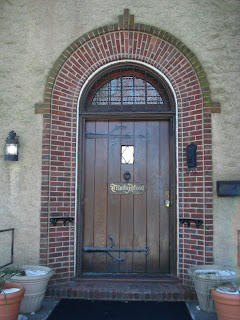 Usually about this time I pack my bags and head out to New York State to go on retreat at Trinity Retreat House in Larchmont.  It is a beautiful retreat house for priests right on the sound.  An old mansion donated to the diocese, one sits in the old living room on nice couches and can stare out the large windows and see the salt water which is only a few yards away from the house reflecting the sun like fish made out of diamonds darting here and there.
That is also one of its problems.  It seems that the last hurricane that made it through there did some pretty bad damage to the old place and so it is off line for a little spell.  But God is serendipitous and as it turns out I was asked (second string) to give a retreat to some of our seminarians this very week.  There are only three seminarians in the particular class that will be at my retreat (so I can't mess up the diocese too badly) and we won't be in New York, just a retreat house in diocese provided by the Notre Dame sisters.
When I go on retreat I have kept up the blog in the past, but I don't know if that will be the case this week.  So perhaps you will hear from me or maybe not until next.  In either event, please keep me, the seminarians, (and Sebastian who will be lonely without me) in your prayers this week.  It would be greatly appreciated.
Fr. V
Posted by Fr. V at 11:26:00 AM