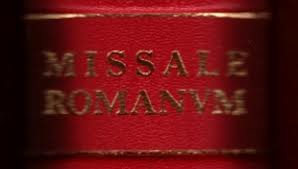 We find ourselves about one year and one month into the new translation of the Missal.  Our liturgical aids are looking pretty shabby – but we still need them so we will probably have to do something about that.  I am finally starting to get the hang of the construction of the sentences with their endless spans between periods and other spots where periods must be ignored all together for the sake of the listener.  And rarely is the phrase, “And also with you” heard accidently anymore (though once in a blue moon I switch some words around reverting back to previous sentence constructions.)
So was it worth it?  No doubt there are things, particular words, certain phrases, construction of sentences that each of us might want to change.  But overall has it served?  From a personal perspective I would say yes.
Perhaps there is no other time that I feel this is true than during a funeral.  Knowing that there were non-Catholics in the congregation I always felt a bit uncomfortable with the old translation fearing that it was not explaining enough.  It contained all the particulars of Catholicism without any of the explanation or grand devotion.  Now I feel as if we are saying, “Here’s the naked truth.”  And if it makes non-Catholics understand better, might the new translation help Catholics understand better? 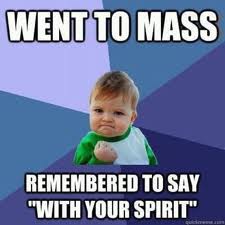 It also seemed rather amazing that we hit the one year mark and it went almost completely unnoticed.  After all of the fear that people would leave in droves or that there would be protests for use of the old translation, the anniversary came and went with barely a peep – not even a review of how we were doing a year after such a change in the Mass.  It was as if we forgot we had even done it.  Like a new great friend, it seems like they have always been around except when something calls attention to the fact that they are new to the pack.
Posted by Fr. V at 7:01:00 AM

At the USCCB Conference this past November, I thought I heard +Bishop Trautman express concern about the new translation, on behalf of priests (?), laity (?)--I can't recall.

The only thing I noticed different is we are finally abandoning the chorus/verse/chorus arrangement of the Gloria.

Our parish had to order new cheat sheets, but most of us only use it for the Creed.

It may be my imagination, but I thing the congregation raised a heartier "And with your spirit!" at Christmas. Perhaps to save embarrassment for our less frequent visitors?

I COULD NOT TELL THE DIFFERENCE

I have found the new translation, especially during the Eucharistic prayers, incredibly beautiful. I find myself paying even greater attention (despite three clinging children) and often, I mean often, catching my breath at the beauty of the liturgy.