TUESDAY QUOTE OF THE WEEK XCIIII 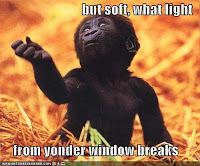 FINDING TRUTH WHEREVER IT MAY BE FOUND: "Richard Burton became acknowledged as a great Shakespearean actor not by deleting problematic passages but by studying them and interpreting them in such a way that his audiences came to appreciate them for all their meaning and beauty; the responsibility of a priest is not different." Fr. Stravisnskas

A number of videos ended up in my mail this week. This one is actually an advertisement but it is still funny and sort of pertinent to the season. This actually happened to a good friend of mine. Thanks Kay.

C. D. sent this in: "There is an organization called ENDOW (Educating on the Nature and Dignity of Women) which began a couple years ago in Denver under the direction of Bishop Chaput." It is in the process of (hopefully) being approved for the Diocese of Cleveland. Send up a prayer for the organization. Here is their web site if you want to know more.

C. P. sent this video in. It is the only version of the 12 Day of Christmas that I can handle at the moment.


102 Catholic Carnivals
A message from Kay: "I created a new blog site specifically for those who have died - I pray for these people at Mass (usually I attend daily Mass) as well as during Adoration & daily prayer time."
The Diocese of Cleveland Enewsletter reports, "On August 16, 2006, Joseph H. Smith, former chief finance and legal officer of the Catholic Diocese of Cleveland was indicted by a federal grand jury in connection with an alleged kickback scheme that federal authorities believed netted him nearly $785,000.
The 23 count indictment alleged that Smith conspired to defraud the Cleveland Diocese and falsified tax returns and other documents. Smith was found guilty on six tax-related charges including conspiracy to defraud the Internal Revenue Service on July 3, 2008.Smith was sentenced today, December 11, 2008, to one year and one day in federal prison." Read the Diocesan statement here.
Posted by Fr. V at 7:04:00 PM

I am so glad you posted the SNC! I heard them for the first time yesterday on my way home from work - great rendition! Thanks for sharing!!

yay! straight no chaser is *amazing*. i just saw them in concert last weekend.

they are an all-male acapella group from indiana university in bloomington, indiana. you should check out their newly released christmas album on itunes :)

I saw that video last year...it never gets old! ROFL!