MONDAY DIARY - A VISIT TO THE MANGER

Every parish has its nitch. Every parish has a unique personality as any individual human being. I had been away from the Akron area for many years and even when I was here we pretty much stuck to our own parish so I am still discovering new and interesting things this way even though I grew up here.

About a week ago there was a district meeting of priests at Nativity of the Lord Catholic Church in a far corner of Akron. Many priests showed up for some lively debate but the church building itself was even more interesting. Set just off a natural wet land area (giving the pastor a problem with beavers – one problem thankfully I do not have,) this modern church building has some interesting features. There are Stations of the Cross through the wet land area, windows of the church depict scenes from the Nativity of the Lord (no shock), a sixteenth century bell in the bell tower, but the most interesting aspect was in the basement.

A retired priest asked if I could drive him down to Nativity and I was thankful for the companionship especially since our computers were down, I could not get to MapQuest, and had no idea where I was going. “Let’s go down early,” he said, “There is something you should see.” So we headed south long before it was necessary and arrived at the parish early enough to snoop around. My friend went up to the secretary and asked if she could turn some lights on in the basement. “I’ve got a new kid here to show around.” She kindly did so and we headed down into the basement. 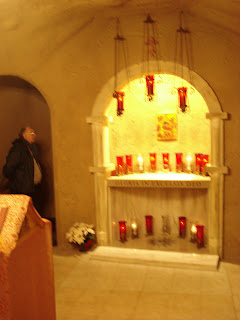 The first thing that we came across was a modest reproduction of the Bethlehem Cave. The walls were curved and textured just like the actual cave and the floor plan was the same save for the treacherous steps and slants. There is a reproduction of the star on the ground, the supposed spot where Jesus was born, and in the center of the star is a rock that I believe is from the actual cave. Now, those looking for an exact reproduction will not find it here, but it is close enough to give one the idea or if you have ever visited there you will certainly recognize it. 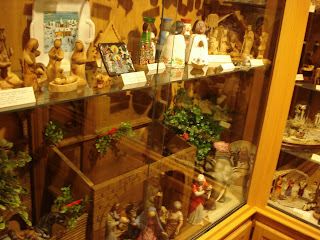 After passing through the cave you come out on the other side to find hundreds of Nativity sets. A museum of Nativity sets is connected to the cave with sets from all over the world, new and old alike. Apparently there are many more in storage and these are rotated though so that the display changes from time to time. It was a fun thing to find. 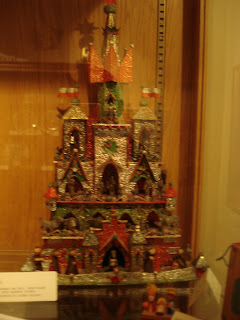 Nativity is located at 2425 Myersville Road in Akron. Selg guided tours are possible during office hours and before and after weekend Masses. There is no admission fee but donations are accepted.

Reminds me of the Chapel underneath the Maria Stein Center - Shrine of the Holy Relics (Maria Stein, OH) (Sisters of the Precious Blood). There's a Chapel on the main floor - but there's another smaller Chapel in the basement. If you didn't know it was there, you'd miss a lot!


There's also a small shrine in Carey, OH - in the Basilica and National Shrine of Our Lady of Consolation (Franciscans)

LOVE nativity scenes. I was looking for the perfect one for years because I demand impressive angels. I bought a set on Ebay that had an angel with about a 12” wingspan, but you had to paint it yourself. After hours of humiliating work, I ended up with an angel that looked like Zena the Warrior Princess meets the Harley-Davidson eagle. It’s still in my basement.

Stan-Hywet Hall is doing a nativity scene exhibit right now that I am definitely going to hit before Christmas. I’ll have to check out Nativity of the Lord Church while I’m on that side of town.

Fr. V. ~ Sorry, forgot to ask....so...are you getting the dog or not getting the dog? Several days ago you said you were going to make the decision "tomorrow". Is it tomorrow yet?

Why doesnt a 730 latin mass on monday evening not fulfill the obligation to attend mass on the Immaculate Conception? That does not seem like accurate information.

Yes! Inquiring minds need to know. Dog or no dog?!

Dear Anonymous, According to the St. Sebastian bulletin, attending the 7:30 pm Latin Mass would fulfill the holy day obligation. I'm not sure what you were asking.

Pat and Anon: the on-line bulletin had a misprint (those pesky adverbs), but the one that went to press was correct. The EF Mass fulfilled the obligation. What a great experience, by the way!

"Every parish has its nitch."