When I was in high school and helping to restore a tiny silent movie theater in my home town, it seemed there was something terribly familiar about the thick wool carpeting going down the aisle. This same carpeting had been seen elsewhere but where? Then I remembered, there were still remnants of that carpeting at The West End Theater where I also worked. As time passed I found the same carpeting (strange person to notice such things) in some of the other old time theaters in town. Being single screen behemoths in a multiplex world the managers did much to cut costs. So if the end of the aisle carpeting from the 1950’s was fine, they would only replace the upper half leaving this same “Hollywood” carpeting at the bottom. Someone must have gone through at one time and sold THE carpeting for theaters.

A similar thing happened with slate pavers. Homes and businesses of a certain era had this blue, grey, and red pattern that must some seller must have gone through town selling at some point. As a matter of fact, there was something similar to this pattern at Borromeo Seminary in Cleveland. 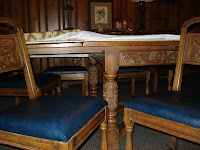 So, we have the gorgeous table in the basement of the rectory. Fr. Jackson tells me that it was brought over from the convent when the convent was turned into the preschool. There is a beautiful sideboard, a dozen matching chairs, and one more impressive chair with a high solid back and arms that I gather must have been the superior’s chair. Interesting enough. 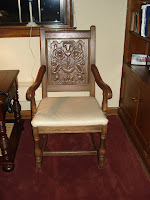 The other day I popped over to a neighboring parish for confessions and took a tour of their rectory. Well lo and behold in their dining room was the same table and chairs. Well, almost. It was if they were the same table and design carved by different carpenters. It turns out that the furniture did indeed come from the old convent (now offices.)

Last week I was invited to dinner at my classmate’s parish, we sit down in terribly familiar chairs, and after curiosity kills me I lift the table cloth. Yep – same table only slightly different – came from the old convent (now meeting space).

I wonder how many of these are around and where did they come from? It was not all the same order or the same era. Was there a “nun store” or a company that sold or donated directly to convents? It would be interesting if someone out there knew . . .

Because of the way this post started out, I was thinking of some of the old theater names that used to be around: The West, The Park, The Lake, The Rondo, The Lynn, The Linda, The Civic, The Highland – so much more interesting than “The Route 34 20 screen multiplex.”

The "nun store" and the grandma store must have been the same place. All the little grandmas in Barberton had a table with the same design. Came from a wonderful furniture store called Weigand Furniture. Remember that place anybody?

Dear Father, I am happy to know that the beautiful furniture from the convent was not sold. It is sad when a parish loses these things (or they "disappear" and no one knows what happened to them).I wonder how old the furniture is. Someone must have selected it with great care when the convent was being built and made into a home for the sisters.