This time I can say for sure that it was not AOL’s fault. Our particular server was down for the whole county according to our computer guy. So here is yesterday’s post.

You may remember Ed from the saving of the wayward hummingbird reported here during the summer months. He came to the rescue once again this past week. My sister has been showing great patience in holding on to a piece of furniture for me until such time that I have a place in which to put it. Needless to say that that times has come and so Ed jumped into the truck and helped me haul this Cleveland Reed Organ to Saint Sebastian rectory. 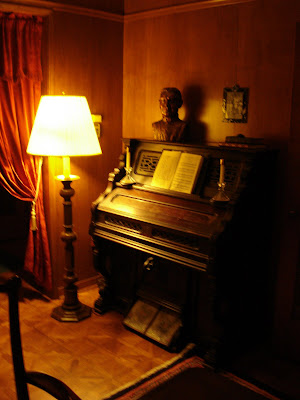 Having a limited amount of music in the rectory to play on the organ this past rainy Sunday night I was of a mind to run over to the choir loft where I had some music suitable for the pump organ. Climbing up the steps to the loft I hear a curious clicking noise. Looking up at the ceiling from where the sound was coming, it was apparent that there was leak in the roof.

Finding the trap door to the roof area I climbed up into the ceiling and walked to where I thought the noise was coming and sure enough there was a steady stream of drips coming in from the roof. So a trip was made back down the ladder, down from the choir loft and to the usher’s room where a waste basket was stolen and lugged back up in the ceiling. A careful walk was made across steel beams and the plastic bucket perched precariously to catch the water. 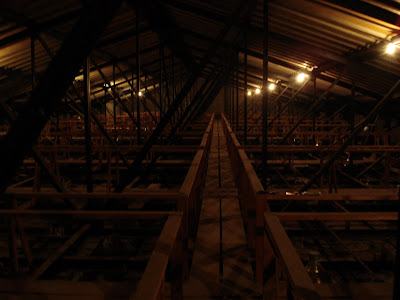 Coming back down from the heavens I was feeling pretty good about having done at least that much. I knelt at the altar rail and said some prayers when the air circulator stopped. There! In the front of the church was another clicking sound! I was torn between being thankful that I had heard it and ticked that it meant another climb into the ceiling. After a heavy sigh the rubbish can from the sacristy was stolen and the trip back up into the stratosphere was made once again, a trip down the catwalks and then across some more steel beams and another bucket placed to catch the errant water. 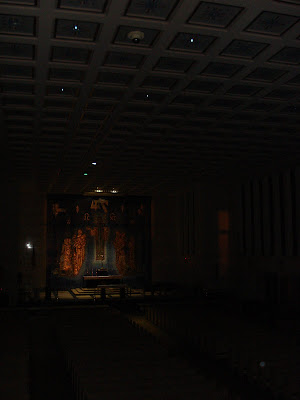 Just file this under what a priest does with his spare time around the church on Sundays.

Just file this under what a priest does with his spare time around the church on Sundays.