DON'T LET THIS BE THE NEW NORM!

Yes, it is a terrible, tragic thing that we cannot all get to the sacraments.  But there are some things to learn from this.

For example, it just plain isn’t all that unusual.  Think of the brouhaha over the Amazon recently and all that drove some of the issues that came up over the lack of priests.  (I am not advocating for change, just pointing this out.)  It is also the reason the Diocese of Cleveland 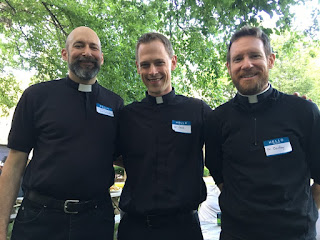 sends priests to El Salvador, there just was not enough priests to minister to all the Catholics there!

My family came from the Alps in Slovenia.  Because they lived in the mountains and before there were modern roads and plentiful automobiles and such, they only had Mass twice a year in their church built in the 1700s because that was the only time a priest could make it.

It wasn’t until 1908 that the United States was no longer considered mission territory by Rome.  Before that we heavily relied on clergy from other countries to fill our pulpits!

Today we getting a taste of what life could be like in the United States again if we do not promote vocations.  Please pray for vocations to the priestly and religious life.  If you are at all feeling pulled by God into such a life, consider speaking with a priest or with the vocation director of you diocese.

Email ThisBlogThis!Share to TwitterShare to FacebookShare to Pinterest
Labels: vocations

I met Fr. Gaitley here in NH a few years back; he can really tell a good story. Must’ve been wild having both of you in the same place...