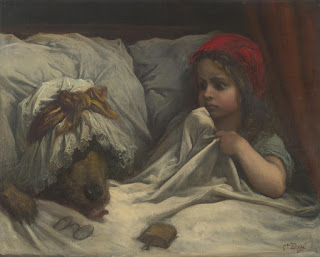 Could we be living out the fairytale Little Red Riding Hood?

One of the original titles of this story is, “The False Grandma,” which might fit better.

So imagine, if you will, that LLRH is our young.  Grandma stands for 2,000 years of Judeo-Christian culture.  The Big Bad Wolf is modern, politically correct culture that takes its place and seems, in many ways, to be so right, but there is something off about it. 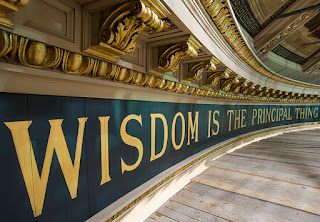 True wisdom comes from contemplation, meditation, study, searching out truths from the past that have been thoroughly thought about by the greatest minds of Western Culture, digging beneath the surface, thinking through to logical conclusions, to grasp the bigger picture, to be a man or woman of intelligence, not just facts.

Every trap requires some complicity from the prey.  The mouse has to step on the lever when its greed pulls it toward the too easily proffered cheese.  It’s time to stop being mice.
Posted by Fr. V at 8:41:00 AM

This is very fine, Father.

I was especially struck by your comments about "freedom" and "choice". I was reminded about something I read once about Satan being the most beautiful of the angels, before his betrayal to God. He uses this to his advantage, always pushing his nasty self into our consciences and lives, by making evil seem noble, and turning something holy into a sacrilege. I understand Satanists do the same thing when they perform a sacrilegious "black mass". Everything beautiful and holy we celebrate in a legitimate Mass is turned upside down, and the opposite is celebrated instead.

This manipulation of turning vice into virtue is happening more often every day it seems, with the dreadful new abortion law in NY being a prime example. There was a photo taken as Governor Cuomo signed the bill into law, which seemed to be a jovial celebration of what is in fact one of the most evil actions ever. And those in favor of this used the very words you mentioned to celebrate - "freedom" and "choice", which, in our American culture, have always been virtues we aspire to.

Put this in a homily, Father!

I think the Gillette commercial is more about confronting the toxic masculinity promoted by people like Jordan Peterson and his ilk on the hard right, like the pro-bullying types on Faux News.

First visit to your blog, I'M LOVING IT!!!