TUESDAY QUOTE OF THE WEEK CDLX

E. F. sent in THIS article about a house of discernment in the Diocese of Shrewbury in response to the possible idea of creating something in Akron.

Below is an advertisement by Henninger's that I found thought provoking.  Let me begin by saying bravi to all of the people who worked on the project.   BUT WHAT I FIND INTERESTING (and this is not meant as a slight to Henninger's) is that for many years progress and art would have reversed these pictures (or worse.)  When I was in junior high school I asked my pastor when will the Catholic Church stop ruining their churches.  He responded, and I quote, "When all of the money to be made wrecking the churches has been accomplished, they will then make a killing returning them all to their former splendor."  Quote a prophet that Fr. Joe. 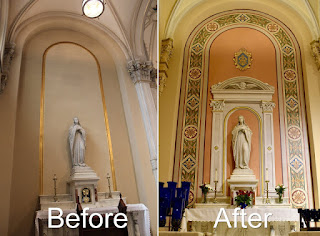 Here are some possible events for you: 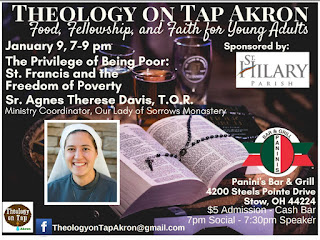 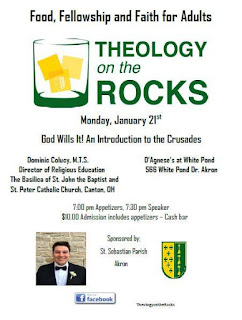 Here is a picture from our Steel Drum concert.  I was really praying that we would get at least 20 people there.  In the end there was over 100 people at St. Paul in Akron!  Thank you so much for coming out! 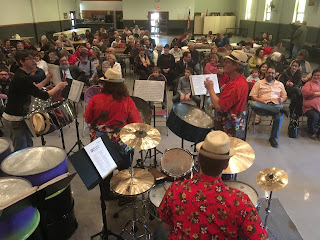 If you would like to see a quick video snippet of the ACA Community steel drum band, go HERE.  And remember - we are always looking for new members.  Go HERE to find out more.
Posted by Fr. V at 6:39:00 AM

Unfortunately, the "wrecking" of Catholic churches is still going on and in many cases those already damaged remain so. I can think of one in particular in The Falls and poor St Mary's in Wooster--dreadful. I hate to say this but much of the blame has to be laid at the feet of Catholics themselves and especially priests who permit and encourage this ruination of sanctuaries. They confuse modernism with progress and we end up paying the price. I wish I could say the end is in sight but as long as so many Catholics cling to some of the failed aspects of Vatican ll, it will go on unabated.

Anonymous - they did "touch" St. Bernard, but it was done gently and with a minimum of disrespect. The altar rail (paid for with the pocket change of the school children) used to stretch all the way across the front of the sanctuary at the top of the steps. Before he hit the road, Fr. Reed brought the beautifully carved antique presider's bench out of storage (at one time it was in the sacristy, used for hanging coats), and moved it back to the sanctuary. There were a few other changes, but as a small child I remember a fearsome statue of St. Michael hovering over the main vestibule off Broadway. He had a sword in hand and looked a bit menacing. My dad told me he was there for the people who came in to Mass late or who left early! Made sense to me. I remember Fr. Schindler saying that the old statues are sitting in parishioners basements, saved from the junkyard by those who couldn't bear for them to be sent to the junkyard. Sue from St. B

Is it possible that the positive changes we are seeing is because people are yearning for a restoration of the sacred?

Shopping malls, for a variety of reasons, are no longer cropping up everywhere. People seem to prefer individual shops.