FRIDAY POTPOURRI: HISTORY OF THE RECTORY: A VISION IN THE WOODS

Directly across the street from Saint Sebastian is a park known as Elm Hill Park, an interesting name since was mostly swamp land and a pond until it was developed.  The story is that when this was the very edge of town and this swamp land was mostly covered with trees, a man by name of Arthur Marks owned this property and had a cabin on it for hunting; Forest Lodge being a rather generous title for the building.  Later the land was donated to the city and as the area developed it became a park. 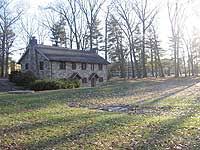 Now we come to the part that plays a role in the history of the rectory.  In the 1930s the WPA built a building in the park known as Forest Lodge.  The building, clearly visible from the rectory below the dense foliage of the trees, is two stories and built of stone.  The top floor was an apartment for the caretaker of the park.  He lived and took care of the grounds.  His family lived with him.  The bottom floor was a small hall with two stone fireplaces out of which the caretaker was expected to run “passive forms of recreational activities,” the most popular of which was renting out skates for area the city would flood each year as a skating rink for the children of the neighborhood.

Of course it became too expensive and problematic to keep this arrangement going.  Over the years the building took on other uses.  It was a preschool, a haunted house and a building out of which children’s activities where run.  The city then moved to the idea of community centers, built a larger building a few blocks away, and Forest Lodge sat almost vacant for ten years.  It seemed to me a waist to have the building just sit there.  If the parish could take it over, we could improve the building, keep positive activities going in the park, and give the parish much needed space to expand.

After some initial time feeling each other out over the idea, the city took us on a tour of the building.  It was in sore shape.  The previous winter the boiler had exploded sending red sediment everywhere.  The current boiler had not been maintained and pipes were leaking all over the place.  There was no air conditioning, there was water damage in the basement, and a general state of dilapidation all around.  This happens to buildings out of use for ten years.