FRIDAY POTPOURRI: HISTORY OF THE RECTORY: DINNING IN 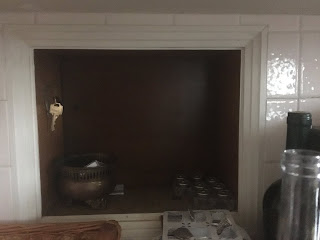 One of the most interesting discoveries was made when the industrial coffee machine, declared to be in the wrong place, was moved to the other side of the kitchen.  Behind it on the counter was a space in the wall about two feet square and one foot deep.  There were keys, one a skeleton key, hanging on a hook so covered with dust that it was obvious they had not seen use for some time.  The back of the space was a little door with a handle on it that opened out into the dining room, the purpose of which was explained to us during a visit with a priest who had been assigned in the hay day of the parish with Monsignor Zwilser.

The dining room, with its birch wood paneled walls, simple plaster crown molding, chandelier, and built in china cabinets, originally consisted of two rooms, the larger formal dining room and a much smaller room between it and the kitchen, set off by a proscenium arch.  The smaller of the rooms was once a smaller dining room.  After the new church was built and a hallway from the rectory to the sacristy was created, the window in the small dining room was made into a door and this little room became nothing more than an intersection between the church, rectory dining room and kitchen.  We stuck a studio piano and pump organ in the space a dubbed it the music room.  The organ was given to me many years before I became a priest by a college that wanted to continue my services for another couple of weeks and had run out of funds to pay me.  In exchange for the organ I stayed on and it has been following me ever since.

The smaller dining room was separated from the main dining room by a thick, velvet curtain that hung in the arch.  Monsignor ate at the long table in the main room alone.  Behind the curtain were the parochial vicars at their more humble table.  Before the parkay floor was added there was a floor buzzer by Monsignor’s seat.  When he had finished a course he would press in the buzzer with his foot and the little door would open in the small dining room with the next course.  One of the priests would take it and pass through the velvet curtain, exchange the next course for the empty plate, return it through the window at which time the rest of the priests would receive their meals; priests and cooks never passing between the two worlds separated by the swinging butler’s door until the room was vacated. 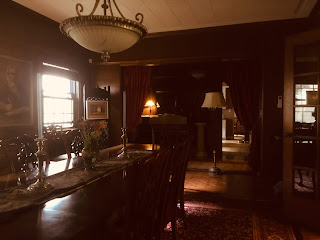 Things are of course much different today, residents tramping between the two rooms cooking, setting up, and eating with no bells to mark the end of a course.  The age of live-in help passed away mostly due to the advent of Social Security.  A woman of a certain age at one time may have found herself in a difficult spot or she may have found herself plain board.  Back in the day, living in at the rectory and taking care of the helpless, vowed bachelors might provide her income, a place to live, and company to manage.  It is almost unheard of today.
Posted by Fr. V at 6:17:00 AM

I think your dining room is lovely, warm, and elegant!

Your story reminded me of the rectory at St. Bernard, my parish. The formal dining room there is surprisingly small (for a rectory which once was home to 4 or 5 priests at a time). It is also very elegant, with dark, polished wood and stained glass windows picturing grapes and wheat, apparently to remind our good priests of the Eucharist. There is a small butler's pantry in between the dining room and the kitchen. The kitchen and pantry don't seem to have been updated since the 1950s, in green and white tile if I remember correctly.

Martha was the last live-in housekeeper I remember at St. B. She died about 30 years ago, in Fr. Schindler's time (Fr. Basa may remember her, since he was with us when he was a young priest before he came back to us). She was from Maine, and all alone in the world. She took very good care of our priests, quietly making sure everything was tidy and that they had hot, nutritious meals and clean clothes. When she died, rather than being laid out at a funeral home, Father Schindler allowed her to remain in the church after prayers and visitation the night before the funeral, and he made sure there was a place for her in our almost-forgotten cemetery (which is next to Glendale Cemetery). She was a very good, decent woman, and well-loved.

God bless you and everyone at St. Sebastian! Sue from St. Bernard

Kind of makes me feel sorry for Father Byrider when he first moved in with Monsignor!