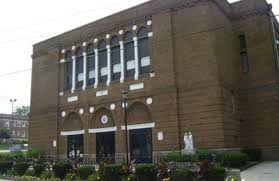 It was the practice of the diocese to build a school/church combination at the founding of a new parish and later to build a more permanent church in order to promote an aggressively healthy Catholic school system.  This is clearly seen in many of the parishes of inner city of Cleveland.  Parishes were begun during a healthy period in the life of the city and a church school combination would be constructed.  The idea was that it would easier to promote the building of a parish church after the school was built than to build a nice school after the church was constructed.  That is why so many Catholic school gyms appear oddly “churchy.”

Unfortunately, it was also at this time that many Catholics fled the inner city of Cleveland and parishes with this school/church combination, never maintained the amount of parishioners necessary to build the dreamed of church and so today are left with church buildings that have a oddly gymish feeling to them. 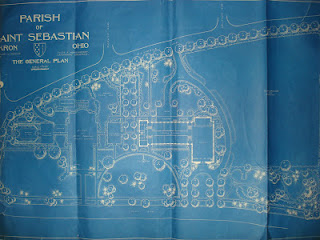 Plans for a new church building at St. Sebastian extend back to the inception of the parish.  On file in the Records Room are various proposed structures that might one day become the parish church.  An early proposal by KRAUS AND COMPANY shows such a building built on an east/west axis (the present church runs north to south) with a dome, apse, and a facade that looks much like St. Sebastian Church outside to the walls in Rome.  Another proposal saw a north/west oriented gothic building with a giant spire, a convent and rectory winging off of each side with open walkways connecting them to the church building not unlike the walkway that connects the current rectory to the school.

Now it was time to stop dreaming.  Monsignor felt that this was the time to put the last stage of development of the parish campus into motion with the building of a new church.  There was considerable pushback at the diocese.  After all, the current building seemed to be meeting the needs of the people and the boundaries of the parish had just been trimmed considerably.  But Monsignor’s forceful personality and persistence paid off and permission was gained to move ahead with the project.  KRAUS AND CO. was once again contracted to design the new building.  This would make the firm the designers of all of the buildings at the parish.  St. Sebastian would have a new church. 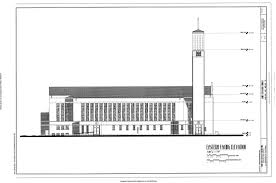 As you walk up the front steps to the “new” church, if you look to the right, you will see the cornerstone laid at the beginning of construction, “AD MAJORUM DEI GLORIA - ANNO DOMINI 1958.” or, “To the Glory of God - the Year of Our Lord 1958.”  Construction would continue over the next year.
Posted by Fr. V at 7:53:00 AM

You missed that day in Latin class: "Ad maiorem Dei gloriam / To the greater glory of God". Which reminds me of a scene from Monty Python's "Life of Brian".