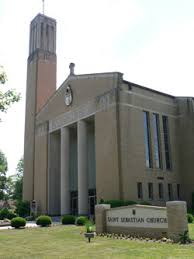 The new church was dedicated in May bringing the total amount of floor space on the campus to 100,000 square feet. The architecture of the new church is modern Romanesque; the exterior construction is cream-colored brick supplied by the Belden Brick Company of Ohio, the company that has supplied the brick for all of the buildings on the campus including the pavers for the new brick parking lot that would come 50 years in the future.  (The bricks for the lot incidentally were given the name Sebastian Red.)  The interior construction contains mostly Travertine marble accented by nine other marbles imported from Italy.

The space is presided over by a large-mosaic depicting the scene of the Last Supper behind the main altar. The altar is made of Giallo Doro marble and the mosaic scene features Jesus Christ in the center, holding a large chalice, and reverent apostles (except Judas in the lower left hand corner) are depicted on each side of Him.  The high altar and the tabernacle provide the “table” around which thy are gathered and the Eucharistic Bread in the tabernacle is the “bread” missing from the scene.

The sketch for the mosaic scene was chosen from several submitted by DePrato Studios in Chicago. This sketch was then sent to Venice where it took one year to make the 175,000 pieces of Venetian glass that make up the complete scene. It took six weeks for four Italian workmen to piece together and cement the mosaic to the wall.

The artist was painter and sculptor Albert E. Henselmann, born in Offenburg whose work tended to reflect the complexity of social and political upheavals of the 20th century as well as the growing importance of abstract forms of expression in art.  According to an online biography, “He received his education at the Kunstakademien in Karlsruhe and Munich and settled in Mannheim in 1925. There followed years of artistic prosperity: the painter and sculptor disassociated himself from a style of composition influenced by the art of the academy and successfully turned to the New Objectivity.  With the take-over of power by the National Socialists in 1933, a process of exclusion began, which ended with the flight to Switzerland in 1938.  In 1950 he decided to venture to a new beginning in the United States.  In the late 50’s, after his artistic work had been subject to the constraints of economic survival, Henselmann connected his work with his earlier developments and pursued his own, abstract-constructivist approaches.”  It was around this time he designed our mosaic. 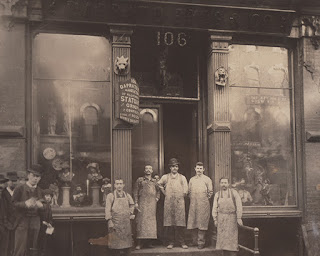 According to a biography supplied by Mr. Thomas Powers who was the Cleveland agent for DaPrato Studios, Mr. Henselmann was well known for his work of modern design in churches, schools, hospitals, and industrial buildings.  His sculptures and paintings are represented in museums and are in many private collections in Germany, Switzerland, Sweden and the United States.
Posted by Fr. V at 7:03:00 AM

Father, I fully respect and admire the artistry of our mosaic. Some folks don't care for the "modern" stylized figures, but you have to praise the amount of work put into it. And the shimmering golds and blues are quite spectacular. I'm so glad it is being restored given the attention it deserves.