FRIDAY POTPOURRI: PARISH HISTORY: 'TILL THE VICTORY IS WON

This is an interesting piece of history to recall as this parish readies itself to celebrate the beginning of its 90th anniversary this July: 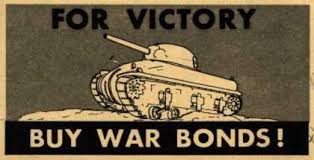 On June 25th of 1944 the parish celebrated the end of it's 25th year with its 15th annual outing.  In the souvenir program, spirits seemed high despite the war and the declarations throughout the program to Buy War Bonds.  “There is nothing to indicate that the expansion of the parish and its physical properties is at an end.  At no time has the future looked brighter.

“The parish still has some unfinished business on its construction calendar.  There is a major project ahead - the erection of a convent building - a home for the faithful nuns who operate the school.


“This will not materialize until some time after the war but it is a certainty, since the parish undoubtedly will continue to grow and the space now occupied by the nuns must be turned into classrooms.”  At the time there were about 400 students in the school. The school prided itself on the plays it put on.  “There are a number of reasons for the school specializing in dramatics,” says the program, “It helps to make the pupils more proficient in their study of English, it develops in them better articulation, and assists them in the development of poise.”

The events of the Parish Outing are also described.  Many sporting events for boys and girls were held including dashes and relays, a wheelbarrow race, base running contests and a cracker eating contest for boys 14 and under.  For women there was a rolling pin contest.  There was a pie eating contest for boys and girls, a Clothespin contest for men and women, and finally a Tug of War and Ball Game in which the married men were pitted agains the single men.  There were also prizes for the largest family on the grounds at 3:00, the oldest person in the grounds, a prize for finding the Mysterious Person, and a guessing contest at the registration booth.
Posted by Fr. V at 6:23:00 AM