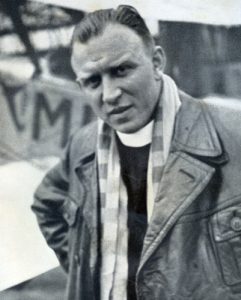 St. Sebastian Parish made front page, above the fold news of the Saturday evening edition of the Akron Beacon Journal on September 24th.  Father Schulte O.M.I. visited Father Zwisler at the rectory to tell of his adventures.  The reporter describes him as “adventurous in spirit, religious of mind, and powerful of body.”  He founded a missionary group whose charism it was to take care of missionaries that were far from away from medicine and science.  The group had a fleet of 300 motor cars, 15 boats, 12 airplanes and 12 wireless stations located all over the world.  See more HERE and HERE.


Fr. Schulte was a pilot and flew dangerous missions “over thousands of miles of Arctic wastes” bringing aid to those who needed it.  Of his many stories, “his longest and greatest flight, probably, was when he flew 2,200 miles to Arctic Bay to reach a French missionary brother, Father Cochard, who was dangerously ill, and fly him to medical aid,” an 18 hour plane ride away.

It should be remembered what an extraordinary thing flight still was in those days.  Wilbur and Orville’s famous flight in 1903 was only 45 years before this interview.  This was quite a remarkable and daring feat.  Because of it, this priest was to be awarded France’s medal of heroism, an honor rarely bestowed. 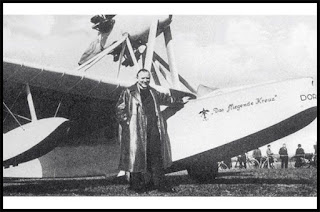 The flying priest was in town trying to raise funds for another plane.  It was to be the first flying chapel in the world.  He was a colorful man with an equally colorful history.  He had made his first flight aboard the great German airship “Hindenburg,” which had met its fiery end the year before this article was written.  He had also flown in what was known then as the Great War.  “I flew for Germany, but without machine guns.  But let us not talk of war.”

But the silence on the topic would not last long.  War broke out in Europe the very next year on September 1st, 1939 and the “Great War” would no longer stand out as a unique word event, gaining for itself the numeral I to distinguish it from what would become Word War II.
Posted by Fr. V at 5:58:00 AM