A good number of years ago on this blog I had a series titled, "Oh the Places You'll Go!" stolen from the Dr. Suess book of the same title.  In it I wrote about how sometimes being a priest opened doors (literally) and lets you see places that most may never have the opportunity to see.  One of those places visited recently I wrote to you about already is St. Paul Shrine were the Poor Clares who are cloistered live.  Almost nobody is allowed back in the cloister but Mother Mary Thomas and I have been working on some projects (on which I play an incredibly small part) and so I had the great privilege of being able to go back into the cloister of this beautiful building.
Here is a picture of Mother and me from last week at which time she revealed the finished painting of St. Sebastian. 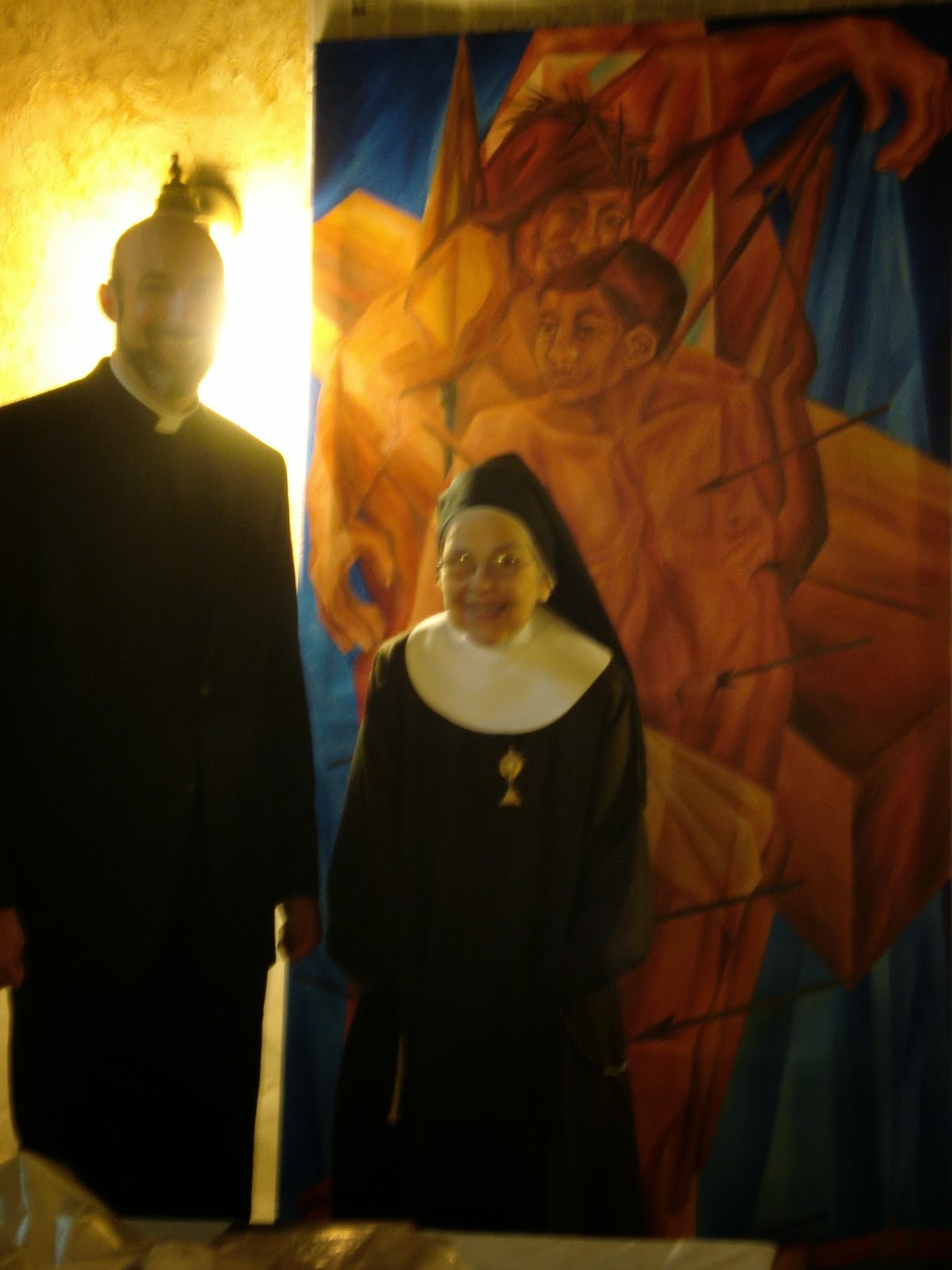 Another good series might be, "Oh the People You'll Meet!" but it would be a lot like name dropping wouldn't it?  BUT it is very cool the people you get to meet because you are priest so with the aim of promoting vocations I will only do it once and limit myself to just a couple.
Of course meeting Mother Mary Thomas who is also a fantastic artist was a treasure.  Below was meeting Pope John Paul II (soon to be a saint!) after having celebrated Mass with him in his private chapel in the papal apartments.  I wish I could say I was very eloquent but after his greeting all I could muster was, "Ablagammagoogoo."  The reason the picture looks weird is because it is a picture I took of a picture.  You might be able to see me with the camera in the reflection.  Gosh, I had a lot more hair then! 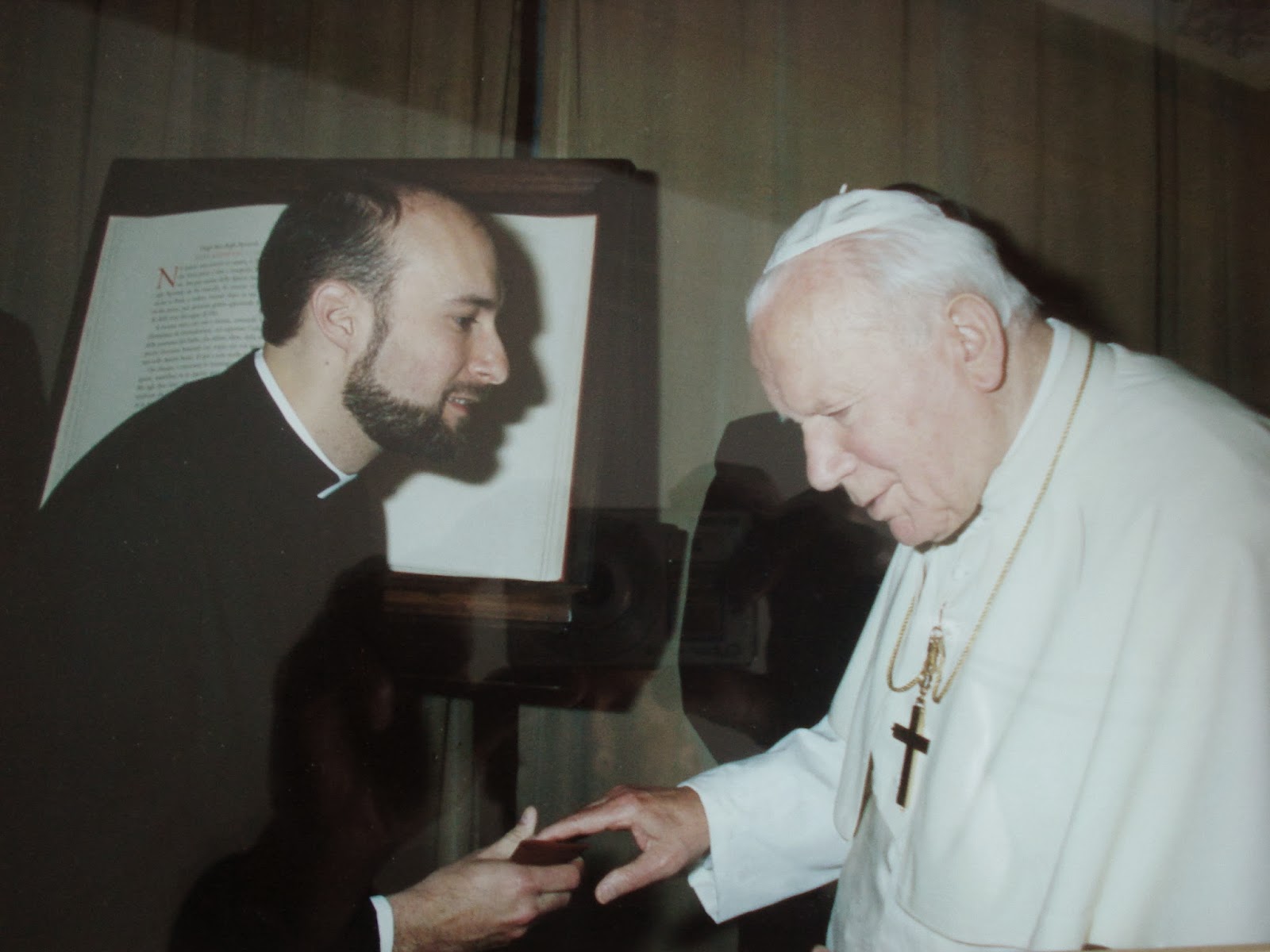 Going to Rome more recently with the parish choir, after singing for the Mass we were invited back into the sacristy (bigger than my parish church) in order to meet Angelo Cardinal Comastri, Archpriest of the Papal Basilica of St. Peter.  People were freaking out.  "No choir ever gets invited back here!"  But we were.  Then he took us on a little tour through part of the Vatican.  What a great day that was. 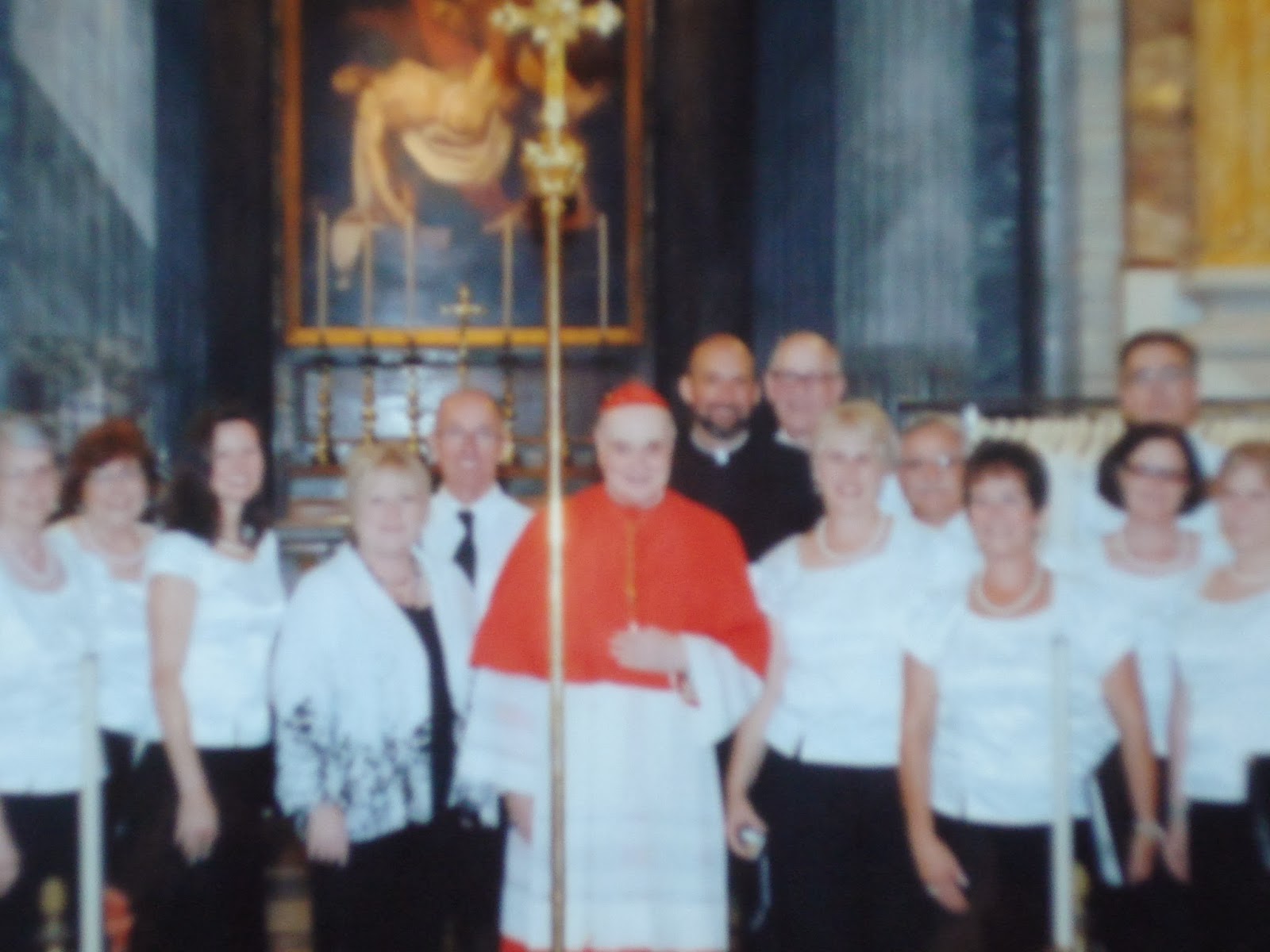 On the same day of the visit to Mother Mary Thomas noted above, a friend named Sharon and I met with Bishop Gries and wonderful couple recently engaged (congratulations and prayers) John and Cortney hoping that they would be on the board of the Poor Clares which they agreed to do.  THANK YOU.  That was great enough but . . . While we were there we also ran in to Larry Holmes and Hanford Dixon who were EXTREMELY kind to be bothered to have their picture taken with some anonymous priest.  God bless you gentlemen. God is sooooooo very cool.  He is constantly blessing it seems.  I honestly do not know why more guys do not want to be priests.  It is good life if you're cut out for it.  (Just like any life I suppose.)
Posted by Fr. V at 12:06:00 PM

Looks like Saint John Valencheck has already procured his halo while still in this life in that first photo. I always wondered what a halo might look like in real life – certainly not like the gold dinner plates that sit atop the heads of statues.

You must have picked up that saintly radiance from your encounter with (almost) Saint John Paul II. You shook the hand of a saint! What a privilege! (Does that make you a relic?)

history lesson: . ..the church building at Euclid and 40th was an Episcopal church. In 1928 the Episcopalians moved to Cleveland Heights and the Diocese of Cleveland bought the building and made it a shrine.

Great post, Fr. V.! Also, if you're looking for links for your Tuesday post, here's a link about the new movie coming out Feb. 28 about the life of Christ called "Son of God". It was made by Roma Downy and her husband who are Catholic.