“The poor dog, in life the firmest friend, The first to welcome, foremost to defend, Whose honest heart is still the master's own, Who labours, fights, lives, breathes for him alone, Unhonour'd falls, unnoticed all his worth, Denied in heaven the soul he held on earth, While man, vain insect hopes to be forgiven, And claims himself a sole exclusive heaven.” Lord Byron 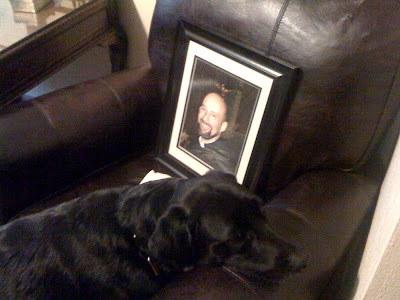 It is an amazing thing that the worst of men can have the most loyal, loving, and beautiful dogs as companions. I think of my dog (spoken of too often here I know) and his great devotion to me. He sits now looking at me just waiting. Later I shall breakfast with a friend and as I walk out the door his ears will droop as if losing his best friend. I will return and it will be as the Prodigal Son, greeted with a joy and enthusiasm all out of proportion.

Sometimes I think of evil men and their dogs. They too are greeted with great enthusiasm, they too are protected to the death, they too are afforded all the signs and symbols of love by their canine companions. Even if they abuse their charges, the dog will come back cringing and lick the hand that had earlier landed blows. I’ve often thought if life were more artistic these men would have mangy dogs with temperaments as bad as their own. You would be able to look at their dog and say, “That is a bad man. Just look at his dog!” 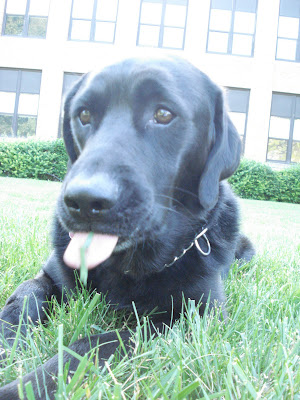 But such is not the case. Oh sure, there are people who form their dog to do aggressive things, but they do it because that is their training. That too is a fierce loyalty. But good men’s dogs and bad men’s dogs are devoted to their owners in a way that is all out of proportion to our ability to love. They wait hoping to be afforded a moment of attention and seem even grateful to be able to return that simple sign with an abundance of attention in return.

It seems ridiculous. Who deserves that kind of fidelity? I dare say not even the good man. But there it is. And we can take advantage of it or no. Even if forgotten and neglected, one need only turn and it is there waiting to pounce on you once again.

As wonderful as it may seem, this is only a pale symbol of the Love God has for you. The meanest, roughest, most sinful soul in the world has not lost the love of God. He waits, straining to pour out His love and forgiveness on the one who neglects His call to a deeper relationship. God never, ever stops loving us, even the most sinful and hateful of us. It is rather that we turn away from Him. We close the door. Hence the God of the most saintly one among us and the most horrid among us has a Beautiful, True, Holy, Loyal God Whose ardent desire is to overwhelm us with His love.

It seems ridiculous. Who deserves that kind of fidelity? I dare say not even the good man. But there is. And we can take advantage of it or no. Even if forgotten and neglected, one need only turn and it is there waiting to be poured out over your head and into your lap once again.
Posted by Fr. V at 6:06:00 AM

Thank you for this beautiful homily. St. Francis himself could not have done better. (And I, for one, love to see pictures of Sebastian and hear of his exploits. He's a great dog.)

You have seen this, haven't you? http://www.godanddog.org/index.html

Great post, love the analogy. I never tire hearing about Sebastian. Actually, just like you have Mon. diary - day in the life of a priest, you should devote another day to Sebastian's diary!!! Oh yeah and give Sebastian my love :)

Excellent post. What a great metaphor for God's love.

I too love hearing about Sebastian. I often marvel at my dogs who greet me when I come in from taking out the garbage as if I have gone round the world. Such unbridled devotion.

This is so true. I spent three years convincing myself that God didn't exist; then I got a dog and a year latter I was Confirmed