According to Vatican II documents the official instrument of the Catholic Church is the pipe organ. NOTE: That does not mean the plug into the wall and have speakers that sound LIKE a pipe organ, but an actual pipe organ. Of course Vatican II also allows other worthy instruments to be played but first in line is the venerable pipe organ.

The reason the organ has become so favored is that it takes only one good musician using both hands and both feet to somewhat mimic an entire orchestra. In this way it is a very versatile instrument. Here is the console of an average sized organ. All of the little white dots are called stops and they represents different kinds of pipes. Pull one and it might sound like a trumpet. Pull another and it might sound like a french horn. The reason there is more than one key board is that you can make them sound different from each other. One might have a solo stop accompanied by a mellower set of stops in the background for example. 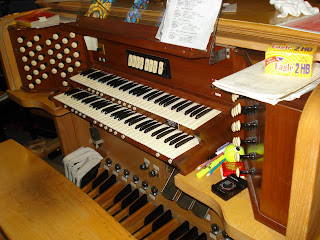 Sound is made by air being forced through pipes. Here you see part of the wind chamber that forces and regulates air going to the pipes. This usually requires a hidden room as part of the church structure. 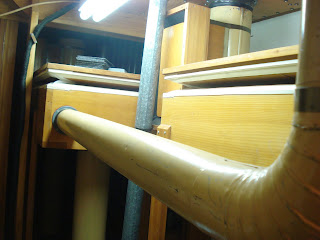 It takes pipes of all kinds. Some made of metal and some of wood. Some as big as your pinkie, some as thick as your chest and a story high. There is one pipe for every key and every different stop. They are tuned (and this needs to be done once or twice a year) either by sliding a lever like on a slide whistle, or denting a pipe. 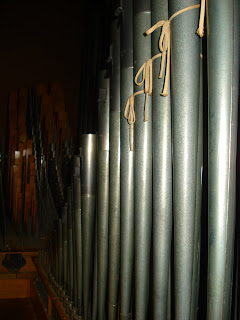 Volume is controlled by these leavers. They are like vertical blinds on a window. When you have your blinds fully open they let in much light, when shut, very little. That is the theory behind the pipe organ sound dynamics. When fully open the sound is at its fullest, when they are shut, the pipes themselves give off the same amount of sound, but it sounds softer because it is as if the pipes are now in another room from the congregation. 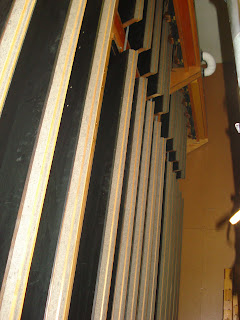 Here is an interesting site that allows you to hear the sound of famous pipe organs.
Posted by Fr. V at 6:43:00 AM

Would you consider letting your blog viewers know about a blog I post on:

It would also be great if you could blogroll/follow/link to it.

Thanks for taking the time!

nice, but did you hear the news? Apparently, a Human Rights Group in Britain are going to do a "legal ambush" on the Pope when he visits to bless a shrine or something. The group. The group wants to see the Pope arrested and tried in court on the basis of crimes against humanity. This movement gained steam after the Pope was embroiled in new controversy this weekend over a letter he signed arguing that the “good of the universal church” should be considered against the defrocking of an American priest who committed sex offenses against two boys. It was dated 1985, when he was in charge of the Congregation for the Doctrine of the Faith, which deals with sex abuse cases.
What do you think? Should the Pope be tried for his huge role in the Sex Scandal?

Honestly? What does it matter what I think? If someone is guilty even faith calls us to allow the person to face the consequences of their actions.

however I do not think any of has the straight story - only what we are being fed. And just because something is a popular movement does not mean that what it is doing is just.

It may be that some sort of legal action may need to be taken but not by a kangaroo court that ambushes people a la Wild West days. As Americans we figured out that this does not work nor does it facilitate justice. And before anyone says, "But is what the pope accused of doing just?" I would remark that attacking one alleged unjust behavoir with another controversial act of justice is not justification.

Even when facing what appears unjust, let us ourselves be just lest we become what we hate.

I don't get it. If the pope is tried and if he is found guilty, then does that mean he is not infallible? Why would God allow his preachers to do such things to children? This whole ordeal has me lost. I trusted the pope, and I think I still do, but if he is truly guilty for keeping this whole thing secret "for the good of the church"....I don't think my faith can last. :(

Please, Father, what is God trying to tell us?

If you read Tuesday - is it not interesting that the news media - now that Easter and Holy Weeks are over are starting to soft peddle? It appears that the story was mostly smoke and not much fire. Imagine that.

But let's assume the worst. Let's say that a pope is as guilty as sin. There are two important things to remember Sharon.


A#1 - We do not, have not, will not every put our faith in anything or anyone but in Jesus Christ. We do not put our faith in the pope, in a bishop, in a pastor, in our parents, in a celebrity, in a prayer, in a building, NOTHING except Jesus Christ. All these other things can serve that faith in Christ, but when they become more important or of equal (or even approaching) importance, then there is something gravely wrong with one's faith. All of these things must serve our faith in Christ or we will always, always, always be discipointed.

2nd - you must have the correct understanding of infallability. It does not, has not, and will not mean that the pope is perfect or that everything he says is right and good. That is a straw man that people set up to attack the Church. They say, "The pope is supposed to be infallable, this pope made a mistake, therefore that must not be the true Church."

In other words they invent a Church teaching and then attack the Church.

Infallability means that the Church through the pope will not make an error in official teaching of faith and morals. This has been true even the pope's whose personal lives have been a tragedy. "The gates of hell shall not prevail against it." This speaking infallably is only used on the most rare of occassions. There was question as to whether JPII used it once (that is did his statement even meet the requirements, they are really quite stringent) - before that it was in the 1950s.

So we can say that the pope is a fallable man like all men and will always be. If he woke up tomorrow and said, "Merry Christmas" it would in fact not be Christmas and neither would the infallablility doctrin be disturbed.

Hope that helps - way too short of answers for such deep questions but here is a starting point.