Taking Sebastian for a walk often leads to meeting people. One of his favorite dog friends owner is a Unitarian Universalist, a delightful c 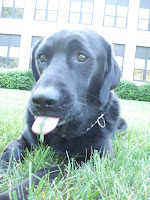 hap with whom I enjoy speaking.

On a recent walk he informed me that they have a new leader (I suppose one can use the term pastor.) It was mentioned that the pastor was moving here with a spouse. I asked if they had children. In his response he said, “Yes. The pastor is male married to a woman. In our denomination it is important to make this distinction because we are welcoming to homosexual persons.”

That comment stuck with me for a spell. I know what he meant but it did come across a bit like if you are a person with an attraction to someone of the same sex you are not allowed in the Catholic Church. This is simply not the case.

What is the case is that all people within the Catholic Church are expected to live chastely. That is, one is to refrain from sexual activity unless one is married and marriage is between two persons who can "conceivably" bear children.

Now, what he m

eant of course is that they recognize same sex unions which is not done in the Catholic Church. But there are many good, practicing, saintly people within the Church with this orientation. The inclination is not itself sinful unless acted out in a way that makes it so (as it would with anybody) and it is important that we make this distinction. Souls may be at stake. If I were told I was unwelcome and sinful for some reason of my being I might too walk away from the fullness of truth, from the Church that Christ established, from my best hope of salvation all because of a misunderstanding.
Posted by Fr. V at 3:57:00 PM

Email ThisBlogThis!Share to TwitterShare to FacebookShare to Pinterest
Labels: Homosexuality

The so called "gay rights" movement has become so powerful that most of us are afraid to speak up in any way. In California,Catholics and Mormons who publicly supported the issue of marriage being between a man and a woman have been subjected to ridicule and violence. The radical gay rights proponents no longer want to be merely accepted, they want to be celebrated. This issue is very difficult to address in public without being shouted down as a "bigot." Now they are teaching kindergarten children what a "family" is (two mommies or two daddies). And parents are not allowed to opt their children out of classes, even on the basis of freedom of religion. The deep hurts of those with same-sex attraction are being blamed on the heterosexual community as a whole. Well, let them "triumph"--they will not find the happiness they seek, because the inner wound will still be there.

Anonymous: There is a danger of sounding like we're talking from a moral pedestal. Isn't that the wrong way round? Shouldn't we be putting ourselves at the service of the lost and confused?

I have to say that I sometimes feel that prejudice and abuse hides behind a religious veil sometimes. Jesus died for everyone - which means everyone!

I'm not arguing for any relativism at all; just that we act our loving values rather than shout down everyone else.

Faith Refound: We are being shouted down and cowed into silence. We do not shout but are accused of doing so, even if we so much as raise some valid point, such as the fact that a homosexual couple raising children is a social experiment done for the emotional needs of the adults and not for the children. A two-parent heterosexual family is best for childen; research validates it, as does our faith. By merely saying this, am I "talking from a pedestal?" The Truth is not even being whispered these days, let alone proclaimed, without putting the "truth teller" in peril.

I have to agree with Anonymous, the shouting is coming from the other side and they are positioning themselves politically and legislatively to silence any dissent. You can only be a service to the lost and confused if they realize that they are lost and confused. The political term "homophobia" implies that those who disagree with their agenda are the ones "lost and confused".

Have a look at the gay pride parades which rival Mardi Gras for decadence, which will prepare you for viewing the gay Last Supper, and tell me something about these poor souls. Meanwhile, I see two mommies and two daddies more and more; the confusion is on the faces of *their* children. I lived in a housing project wherein the women got tired of waiting for men to rescue them. Guess what they did? Am I a homophobe, or someone with eyes?