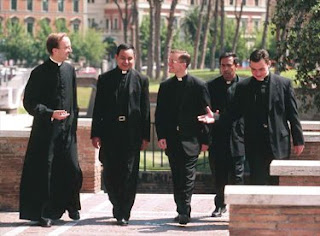 Before I leave on vacation I thought I would jot down some things that happened this past week. Fr. Pfeiffer and I had a house guest this past weekend who is a younger priest. We all celebrated Mass together on Monday morning and after they were kind enough to go on a walk with me and Sebastian on his morning airing. I was mulling things over as we were walking down Mull Avenue when I said, “I wonder when is the last time West Akron saw three young priests out for a walk in all their clerical glory.”

Fr. Pfeiffer responded, “*Ahem*, Father, that would be two young priests and one middle aged priest.”

Fortunately I like Fr. Pfeiffer and had Sebastian bite him only once.

A parishioner remarked that he saw us out on our walk and thought we looked like a new and strange gang out showing our colors.

I guess in a way we were.

I suppose there is the lesson of clerical attire. Who would have known the presence of the Church’s ministers in their neighborhood had we not been thusly attired? It is like watching a movie and seeing a pan of a crowd and spotting a priest in his color or a nun in her habit and being reminded just for a moment, “Ah, there is the Church. Remember faith. We are there.”

If even gangs get it I guess the Church was always been on to something.

On July 4th Fr. Pfeiffer had the morning Mass. I was coming over for confessions at the end of Mass and realized that there was no music. No music on July 4th? That cannot stand! So I climbed up into the choir loft and got out some of my music and powered up the mighty pipe organ. They were just getting ready for communion and so as quickly as I could I picked out a song, hit a preset button and placed my fingers on the keyboard to play.

Oh! But the preset had been changed and I did not think to check it! The people, quietly and reverently began to move toward the communion line, thoughts lifted up in silent adoration. Light streamed in through the colored glass giving a mellow glow to the morning and Father’s robes flowed gently as he glided down the steps with our Lord in his hands to distribute His Body to the faithful who came to begin their celebrations by offering their thanks to God. The very picture of serenity.

Then I pressed my fingers down on the organ keys and produced such a fog horn blast that birds for miles around took to their wings sure that a giant bird of prey was coming down upon them. For one moment, in unison, the whole congregation popped up as if some giant foot had kicked the church floor. Children cried and those with pace makers grasped at their chests.

No, it was not the parousia, it was just me.

(It was not quite that bad but awfully darn close.)

You know, being priest is awesome. My friends and I sit around a wonder why more guys don’t want to do this. It is such a privilege, joy, honor, as well as being a life of such meaning that I can’t help but tell young men (and not so young men) to at least entertain the question as to whether God is calling them.

In this Year of Priests, please pray for the young men thinking of the priesthood.
Posted by Fr. V at 5:15:00 PM

I think it very good to continue to spread the not-well-enough-known truth that Priests are in general, when you speak to them, very happy with their lives.

Several that I know speak most eloquently about the joy of this life, this vocation.

As a guy called to married life, I feel it's my job not only to pray for vocations, but to tell my sons, for I have two, that if God calls them to the priesthood, it would be best if they say yes. :-)

Father, I recall your recent homily about where "we" are, there goes the Church. Our priests in clerical garb are a visual reminder that the Lord walks among us.

Middle Age??? Father, I admire your restraint. I would have had my dog bite him more than twice!

Have a wonderful vacation!

Gee Father V. Brings back old times at Sacred Heart when you hit the keys for the first chords of Our Lady of Fatima and shook the whole church.

Speaking of movies, two nuns appear very briefly in the crowd at the end of Meet Me in St. Louis. The effect is a bit bizarre, however, and had this viewer wondering whether the message was "Memento Mori." =S

this is the second reference to young men enjoying priesthood that i've seen in two weeks... you must be on to something!

I think what holds a young man back from being a Priest is the prospect of becoming a priest, as opposed to the reality of the vocation. i.e. the giving up on the acquisition material items, marriage, and perhaps the "super-hero" status that comes from being a fireman, police officer or military man.

It may be the case that someone who is planning to enrich themselves in higher learning past college for the next several years would prefer becoming a doctor or lawyer as opposed to a Priest, partially because they would want to be compensated for their years in school. This mentality may have originated from their parents, many of whom were part of this technological revolution, and dont necessarily hold the Catholic Church in the highest cultural regard as did previous generations. This is somewhat of a generalization, but I am basing this on what I perceive to be a trend, based on what I read and see. The children of these "tech-parents" may have grown up going to Church on Sunday fulfilling a chore, as opposed to participating in a Holy and honored family tradition.

The priesthood is a calling I believe, and there is an upside to fewer priests entering the priesthood because it purifies the group. A man who makes a decision to become a Priest in this modern day, is clear in his direction. These men will become the great leaders of the Church and community, because of their remarkable skills, talent and smarts. These attributes were acquired as a result of their great faith, and will eventually, directly and indirectly, inevitably recruit other young men to the Church who will equate these talents and skills to being a Priest. These few Priests will not only recruit for, but continually re-invigorate the Church, and we will enter into a new era of Catholocism. It is happening already, and I have seen with my own eyes a young Priest illuminate a Mass with ease time and time again. I have read the blogs from Fathers from all over the world. They are filled with depth and are works of art.

The Catholic Church has evolved to embrace the various new forms of communication that each generation puts forth especially this one, and the process is bearing fruit. The religion and tradition has remained much the same, but some of the methods of delivering the message have changed. These new methods of communication are reaching this generation effectively. It is only a matter of time until the Priesthood once again becomes a serious option for a young man.