FRIDAY FAIR - ARE THE STARS OUT TONIGHT, I CAN'T TELL IF ITS SUNNY OR BRIGHT 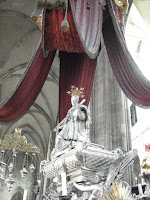 I learned a new symbol on vacation. St. John Nepomucen was the Queen of Bohemia’s confessor. Unfortunately for John the King was not happy with his wife the queen and wanted to be rid of her so that he could move on to other pastures. The king was sure that the queen had confessed that she was unfaithful to him so he called on John to have him reveal the content of her confession. John, of course, refused to break the deal of confession. So the king had him tortured participation in the torture himself. As you may have already surmised Saint John refused to break the seal. This so infuriated the king that he had him taken out on the Charles bridge and thrown into the river. 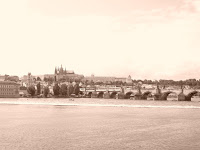 At the spot where he was thrown in the river there is a large statue and like many depictions of him depicts him with stars around his head. Stars around the head are usually reserved for

the Blessed Virgin Mary but this saint is the exception. The stars are a reference to the stars that shown in the sky that night. When his body was thrown in the water it was thought that his body would not be found in the dark of the night nor would it be intact. But the stars cast a strong light where his body laid and so they were able to find him – hence the circle of stars around his head.
Posted by Fr. V at 10:17:00 AM

This is a fantastic story for the year for priests. What a good and faithful priest!

Thanks for the post I will be sharing this with many people.

It must have been very difficult to live in a country with a monarchy governemt. Thank God we live free.