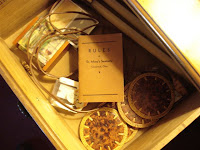 The mystery has been solved! (I think.)

N. read about the mysterious discover of Fr. Ozimek’s copy of the “RULES of Saint Mary Seminary” showing up at St. Sebastian (see Rules, Rulers, Ruliest from last week.) When the priest that followed him retired he packed up a bunch of books to be donated to a resource library here and it is assumed that the RULES book must have been included and pulled aside as an amusement perhaps for the priests of the house. A reasonable explanation. Thanks N.!

Here are a few more excerpts from the book:

45. RECREATION DAYS: When out on recreation days they must not go to places of amusement, such as theaters, dances, ball-games, and the like. These rules apply, with proper modifications, to any occasion when they are out of the house.

47. RECREATIONS: Games that are mentally fatiguing rather than physically fatiguing are not be encouraged. Dice and cards are excluded, as are all games for money. Cheap joking, suggestive remarks and course amusements will not do. All are to share in the recreation period.

48. SICKNESS: (I love this one) A student who feels ill should ask for a doctor, if he thinks that there is anything seriously wrong.

49. MEALS: Nourishing food is ample quantity will be provided. There will be no occasion for talk and criticism about the quantity and quality of what is served, and there will be no reason to bring food surreptitiously or to take food from the refectory to be consumed in rooms. To do so is merely a confessi 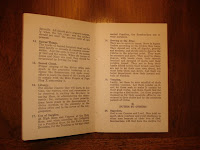 on of greediness. As to drink, any one found under the influence of liquor will be severely dealt with, and anyone who brings liquor into the house or who has it in his room invites expulsion.

53. DISPUTES: There must be no loud debates amongst the students. Men may differ in opinion and may state those differences in quiet tones; much vociferating (another great word) indicates a determination to win by strength of lungs rather than by weight of reason.

54. HONORARIUM: The bell should be obeyed as God’s command. Instant response to it will make obedience easier.

79. VACATION LETTERS: At the end of their holidays they are to remind their pastors to write out the report on their conduct while in the parish. The report is to be sent to the Seminary sealed.

82. SPECIAL OFFENSES: There are some faults which are so disgraceful in a cleric and so scandalous to the people that those guilty of them must be summarily dealt with for the good of all. And one who does such things, which God forbid, must be instantly expelled. Amongst such offenses would be, getting drunk, fighting in the presence of others, striking a cleric, insulting a professor, joining a group gathered secretly to gamble or drink, going out of the Seminary at night without the superior’s permission, foul language, or familiarity with a woman. Once guilt is established in such offenses, there is no reason for hesitation; the culprit is to be dropped at once as unfit to be a cleric.

Hmmm... I don't see any 'rule' about a seminarian adding buildings to the architectural model of the grounds. *grin*

ahhhhhh ...
me thinks the good old days were lived by those less enlightened than those in charge today [tongue in cheek].

what a precious treasure you've found.