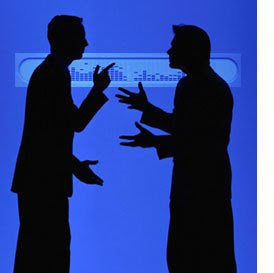 Funny how two people can walk out of the same Mass and one person think it wonderful and the other think it the most horrid piece of tripe to come down the liturgical pike. I am sure that if I were able to celebrate Mass and have everything go exactly the way I want it to, there would be those who would be ecstatically happy, those who would by hysterically upset, and the majority who just want to hear the Gospel, receive communion and go home.

At times people (read: I) can become quite passionate in our declarations about the Mass. On the one hand this is extremely cool. People do not become passionate about things unless they are very important to them. It is awesome to have people excited about the Liturgy.

But when it comes right down to it, though it is nice (what a horrid little word), it really doesn’t matter if I “like” a particular Mass or not. That is not why we are there. There is something much more essential that needs to be taken into account rather than the particular aesthetic reaction one might have. The criteria must have some connection with the basic, essential nature of the Church: the Four Marks of the True Church being ONENESS, HOLINESS, CATHOLICITY, and APOSTOLICITY. So lets say that you attended the mass, and although it is probably better to attend to pray with a community rather than critique the way they pray, occasionally something motivates us to examine exactly what it was we experienced. So lets give it a go.

ONENESS: Christ’s mission was to make us one people whose roots are in the One Triune God. Did the liturgy lead us into that unity of mind with the universal Church in essential things (faith and doctrine, worship, and leadership)? Were there things intended to be common among all Catholics that were excused away because, “That is not the way we do things here.” That is not to say we must have strict uniformity (after all, we first realize that there is more to the Catholic Church than just the Roman Rite for example), but there are definite things to which we are all called. To do otherwise is to make that aspect of the liturgy the rite of the particular priest or parish and not the Chruch. That is not part of what it is to be Catholic. So was the mass licit: that is lawful? Was it in keeping with the greater mind of the Church in essential things?

HOLINESS: Here is probably where validity comes in to play. Were those present exposed to Christ in the fullest and most authentic way possible on earth? We are a sinful people who can be made holy by His Word and through contact with Him in the sacraments. So was the Sacrament validly celebrated so as to put us in contact with Him in order to gain this supernatural grace?

CATHOLICITY: Where oneness brought us to our identity as one in Christ, catholicity recognizes our legitimate differences. Were all invited and made welcome to the extent possible (that is to the extent that they are one with the Church)? Did it move its participants to take the faith beyond the walls of the Church to the world?

APOSTOLICITY: Were the messages of the mass orthodox? Was the Gospel message proclaimed on the Catholic playing field (homily, music, etc.)? Was the Mass obedient to the Chair of Peter? Was the priest in union with his legitimate bishop? Did the Mass further the mission of the Church?

After all of that has been settled, then we can talk about the tawdry music, the length of the gaudy chasuble the priest was wearing, the horrendous banners, the ostentatious Ea

ster decorations, the boring homily, the uncomfortable pews, and the Cheerio eating infant that cried in your ear the entire Mass. That is not to say that these things are not important, but they are truly secondary. To quote the inestimable Rev. J. Glenn Murray SJ, “Even if the Mass is as dry as dust on toast in the desert, God still works” for the one whose mission is to worship God as the Church intends.
Posted by Fr. V at 5:49:00 PM

This is all about the debacle that happened at my parish, isn't it? This is all about me...I'm sure it is. (Actually, no...I said over and over in my post that it was only the music that was bad.)

Incidentally, though, it's not paranoia when THEY really ARE out to get you!