NO SHIRT, NO SHOES, NO SACRAMENTAL SERVICE 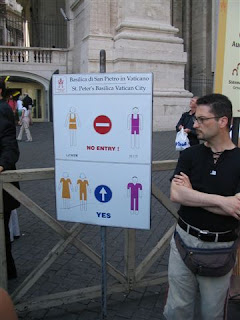 This line is from the play, “The Elephant Man” about a man struck with the terrible disease elephantiasis that greatly deformed his head. He was crying out for people to treat him with the same compassion and respect they would any human being and not scorn him simply because of the way he looked.

Many people use this same line to defend the way they dress in church. When summer would hit my last pastor was want to put a notice in the parish bulletin informing parishioners that he was aware that the summer months were upon us and assured them that the air conditioning was serviced and working and to please dress appropriately for mass. Of course there were the several phone calls and one or two anonymous letters blasting him. “You should accept people for who they are and not how they are dressed! Stop judging people! At least they are at mass!”

Of course they are right. People should not be judged for how they dress at mass. Especially since it may well be that they cannot afford to dress any better. Where this argument falls apart however is with people who otherwise have the means to dress appropriately and choose not to. Clothing says more than something about you, it also says wha

t you think about other people. If you go to a job interview in ripped jeans, a death rock T-shirt, uncombed hair and ratty shoes, you may use the argument, “He never accepted me for who I am,” but sure as the pope is Catholic he is at the other end thinking, “He doesn’t really want this job, does not respect me, does not think much of this company, and probably will have the same attitude toward our customers.”

So when someone comes to mass dressed inappropriately (and I believe that there are different standards for different situations though modesty is modesty) it is not simply a matter of “people need to accept me for who I am”, but “What am I saying to others and about what is important to them?” Am I saying (even inadvertently) that this isn’t really all that important? Serious Catholics say that the Eucharist is the source and summit of our lives. To come dressed like you just got out of bed and rummaged through the reject bin at the Saint Vincent de Paul Shop makes a strong statement especially if you can and do dress better at other times which, quite frankly, marks those things symbolically as the source and summit of your life. You can say, “But God knows what’s in my heart.” But Mrs. Smith doesn’t and Catholicism isn’t about “me and God” it is about “us and God” and that means paying the same respect you want from the community to the community.

So what do you do with good-clothing-manners-scofflaws in your parish?

Well, there are a few options, most of which I would avoid.

The first option is to give the offender the obvious once over and then lift one side of your upper lip in a sneer and then look away in disgust.

Another option is to say something loudly to the person next to you in order that the offender might overhear such as, “Can you believe some people come to mass dressed up like a teenage Jezebel?” 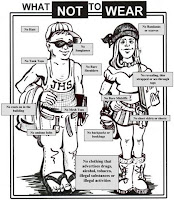 You could encourage the pastor to write a scathing letter in the bulletin or make a hell and brimstone sermon from the pulpit about being an occasion of sin for others.

You could be honest and blunt and just say to the offender, “I’m sorry, we don’t dress to intentionally offend people here at this parish.”

I don’t recommend any of these tactics. Christ message from beginning to end is about unity. Every one of these tactics will only cause division. We just add to the scandal already caused. My advice (with my Monsignor Manners hat on) is don’t do any of them.

So what can you do? Nothing. Well, almost nothing. Start with setting a good example. Dress a little better than you want others to. Young people in the Cleveland area began doing just that not too long ago. Determined to influence their peers they began dressing in gowns and tuxedos to attend the opera. Somebody has to start the trend at church too and might as well be you.

Determine over whom you have influence such as with your children. Have them dress at least modestly and

neatly. Use the same influence that you have with them to get up, dress well,and get to school.

Inspire dressing well in the day school and CCD if possible. A priest friend was telling me about a trip he made with his youth group to this last weekend Steubenville. The school was taking a stance against short shorts. They explained it well and in depth and told offenders that if they were going to attend the retreat, they would have to change clothes. One girl wrote about her experience at the retreat, “I am a human being. I am not for sale!” The priest was so moved by her revelation that he hung the note up in his office.

If someone is staying at your house, gently encourage them about dress. “You might want to bring some nice clothes because we will be going to mass on Sunday.” 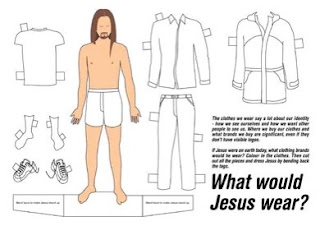 Find ways to make dressing appropriately inviting. If people feel they are being ostracized they will either fight getting dressed up or stop coming to mass altogether. Rather than putting, “You people look like a bunch of hoodlums,” in the bulletin invite people to help others know of the importance of the mass by their signs of reverence, one of which is dressing up. On certain occasions invite people to dress particularly well such as, “Show your parish spirit! Next Sunday is the celebration of our parish feast day. Please dress up to help us celebrate!”

Email ThisBlogThis!Share to TwitterShare to FacebookShare to Pinterest
Labels: Dress for mass

Yes, setting a good example is the best thing.

When I started wearing nice clothes (slacks, black dress shoes, a button-down collared shirt but no tie due to a tracheotomy scar at the base of my throat) to mass at my old parish, my deacon made a telling remark.

He asked if I could read that day for someone who was ill (many of the parishioners are retirees so someone is always keeling over at the last minute). He said, "You're dressed for it anyway."

And I realized that we, as a parish, were in the habit of dressing like bits of flotsam and jetsam found on the beach, unless we were reading at mass, then we combed our hair and put some long pants on.

I bet the kid that comes to mass wearing his Metalhead T-shirt puts on a tie when he interviews for a job at McDonald's. Tells you something, doesn't it?

Does anything simple happen in your life?

-Does anything simple happen in your life?-

It's funny, I lways think of my life as humdrum (and appreciate that. I do not like excitement or surprises!). But everytime I relate some personal anecdote people are shocked.

Answer: After a really bad car accident I was kept under sedation for ten days. They gave me a tracheotomy to keep me from choking on my blood. After my hospital stay the hole closed up on it own, but I still have a scar there and I can't stand anything coming close to it, like a tie or a close fitting T-shirt. Even my wife's hand makes me gag if it gets near that scar.

Father, that is a great post - the best commentary I have read on dressing appropriately for Mass. You bring up many valid poinsts, but I especially like your little examples of what not to say! LOL!

Maybe instead of "WWJD" bracelets we could hand out "WWJW" bracelets at church to remind people to dress appropriately!! LOL!

fr. v
In these Summer months many wear baggy, wrinkled shorts and T-shirts--sigh I feel overdressed and uncomfortable in my "office wear."

Dressing differently from the beach or amusement park shows a positive respect toward God. At least dress should be clean, respectful, and modest--please modest--I don't enjoy seeing the naked body parts of other girls. This is not respectful to yourself, me or God.

At weekday Mass, I wear my scrubs--so I can make it to work on time--very causual, or I wear my jeans and T-shirts. Oh, sigh. While I dress up a bit on Sunday's I kinda like the fact that it's okay to dress causual.

This is a great post. It applies to Reformed church worship services too. Thanks.

It's also very important to dress like a handsome lad because priests enjoy that sort of thing. And no punk rock hair cuts either, that's such a turnoff.