When you see these letters you know that they stand for something. VIP is not a word but stands for Very Important Person. We use letters too in our symbolic language to refer to other things.

IHS is a very common group of letters in our churches. It is sometimes mistaken for the Latin phrase, “In hoc signo” meaning, “In this sign”, a reference to the story of Constantine seeing a cross in the sky and being told, “In this sign you will conquer” which precipitated his, and consequently all those under him, conversion to the Catholic Church. It is also sometimes thought to be an acronym for, “Jesus hominum salvator” or “Jesus, savior of men.” These are both nice and perhaps clever definitions of these symbols but historically incorrect. They are actually the first three letters of the Greek word “Ihsus” or Jesus. If Jesus had a plush terrycloth bathrobe, this would be one of the monograms he might have embroidered on it.

Variants on this might be “JHS” or “IHC” as Is and Ss are sometime interchangeable in our alphabetical character schema with Js and Cs.

The X with the P superimposed over it is called the “Chi Rho,” the first two letters of the word Christ in Greek. This is another bathrobe monogram.

The Alpha and Omega symbol also refers to Jesus. They are the first and last letters of the Greek alphabet. In revelations 1;8 Jesus referring to himself said, “I am the Alpha and the Omega . . . the one who is and who was and who is to come, the almighty.” 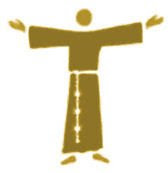 The Tau, the last letter of the Hebrew alphabet, can call to mind the cross. St. Francis calls us to put on the cross of Christ and the Franciscan habit, if laid out flat would roughly form this shape. The "T" can also refer to God as it is the first letter of in the Greek word for Theos.
INRI, I was once told, stood for, “I never regretted it.” Of course it really stands for “Jesus Nazarenus Rex Judaeorum” or “Jesus of Nazareth, King of the Jews” which comes to us from John 19;19.
There are a few really cool monograms for Mary, but I can't find examples of them easily shared on the Internet and they are too difficult to explain. Perhaps I'll get around to scanning them some Sunday.
Enjoy the weekend!
Posted by Fr. V at 9:22:00 AM

Maybe some of the Marian symbols are here:

I think it does have a few, if I remember correctly, with no explanation--just that its a sign of Mary.

Below are some additional websites regarding symbols of Mary. Some of these pages have background information. There are also some great ideas for prayers and reflection.

I'll check them out. Even if they don't have what I need them for I'll post them as a reference for others (when I have time!)