HATE FUSS? WE CAN WORK WITH THAT.

Time was when kids wanted to get a baseball game together the problem was finding enough mitts or getting the guy with the good equipment to play. Now if kids think about getting together to play baseball the questions are, “Who will we get to coach? Who will sponsor us? What kind of uniforms will we have? Where do you want to go out for ice-cream afterwards?” No wonder kids would rather play a pickup game on their computers.

Like wondering why kids no longer use ball fields we priests sit around and wonder why not as many people are using the Church to get married. There are many reasons not the least of which is the loss of a willingness to commit. But it has been suggested that some don’t want to get married because of the whole fuss, pomp, and circumstance it is perceived that one must go through in order to get married in the Church. “With this ($5,000.00) ring (and the help of 43 paid professionals) I thee wed (at this multi-million dollar affair).” No wonder couples would rather simulate marriage or just go to the justice of the peace.

“We just want to get married,” some couples say and this past month I have had three separate incidences of couples being relieved and joyful when it has been explained that they can be married in the Church with just two witnesses and a 15 minute ceremony costing next to nothing. No organists and singer, no dresses to buy, no tux rentals, no cast of thousands, no flower arrangements, no invitations or worship aids, no limousines or rice, no rehearsals or liturgy planning meetings, just a few short, relatively painless meetings with me, a Precana Day for those for whom it is appropriate, and a date when the Church and I are both available.

OTHER MYTHS TO BUST ABOUT GETTING MARRIED IN THE CHURCH

If you are going to marry a non-Catholic in a non-Catholic ceremony, IT IS OKAY! But you must let your parish know. Most likely they will make sure that you are receiving some kind of wedding preparation and then have you sign a dispensation form. This basically allows you to marry whomever wherever you wish if you are both free to marry.

If you do not do this, your marriage will not be recognized in the Church. This may not seem like a big thing until your little brother asks you to be his sponsor, or your asked to be a God-Father to your niece or some such thing. At that point, your marriage will have to be reconciled with the Church. That means exchanging vows before a priest in a small ceremony. Avoid that fuss. Go sign the paper. 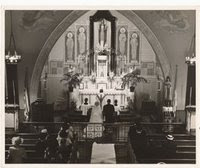 If you are already married to your partner, you can still have your marriage recognized in the Church if you were both free to marry otherwise. Please contact your parish for further details.
Posted by Fr. V at 7:13:00 PM