BUT IS IT THE TRUTH, THE WHOLE TRUTH, AND NOTHING BUT THE TRUTH?

Georgia Tann single handedly began adoption in our country. As a social worker in Memphis she began her work helping parents who desperately wanted a family to adopt children. To give you an idea of how unpopular a thing adoption was at the time, that same year the great city of Boston registered only 5 adoptions. She helped ease fears of eugenics and encouraged adoptive parents toward providing children with safe, loving, stimulating environments in which any person could grow up to be healthy and productive adults. She in essence “invented” adoption as we now know it.

At the other extreme, Dr. Joseph-Ignance Guillotin is often credited with designing the instrument 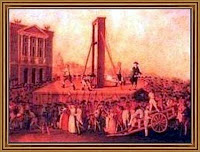 of death that bares his name; the guillotine. It is a machine used in both historical and horror movies. There is the assembled crowd, the blade falls and a head drops into a bucket. The bloody blade rises again waiting for its next victim. From 1792 till the advent of Napoleon in 1779 as many as 15,000 people may have lost their heads over Dr. Guillotin’s invention.

Clearly Georgia Tann brought so much good and life into the world while Dr. Guillotin brought nothing but death and destruction. Ah! But history is a funny creature and things are not always as they appear.

Even given nothing but facts we can be easily misled about historical events. The fact is that Georgia Tann stole babies, sold them for outrageous amounts of money by which she grew rich. She falsified birth records, and set some policies that still effect the adoption process today that are not necessarily all that beneficial. Children were abused under her care. In fact, in one three month period 30 to 40 children died due to neglect in her orphanage. (As reported on NPR.)

It is also often dangerous to apply modern ideals to past actions especially when progress has been made. In Dr. Guillotin’s time execution by the state was a fact of life. But there was a great inequality in the manner by which people were put to death. The rich could afford able executioners who would end their lives swiftly by sword or ax. The poor were most likely hung, a process that was both painful and could be comparatively lengthy. Even those poor who were put to death by sword might need repeated blows either due to incompetence of the executioner or by the dullness of the blade. Families might pay the executioner an extra sum to make sure that his blade was sharp.

Dr. Guillotin was part of a committee that searched for a way to make execution both more humane and egalitarian. His point was that this punishment was to be about death, not torture or pain and if there was going to be a death penalty, it needed to be done as humanely as possible.

Full disclosure and context are vital in understanding history; a game not played fairly by modern attackers of the Church. All stripes of people have committed horrendous actions within and in the name of the Church (mostly when stepping outside of that which we are actually called to by the Church) and there is no need to distort history to come up with more.

So when confronted with the “facts of history” by a person, movie, or book trying to make an attack against the Church (or any person or organization for that matter), take it a step further. Research it. Place history within its proper context; what was considered the best

moral then, not by 21st century standards? Is there a point using 20/20 hindsight instead of understanding the uncertainty and best judgment of the moment? What might more facts concerning the situation be? Is what is being quoted to you faulty “common knowledge” or based on scholarly research? And most importantly (and perhaps most strangely) does what is being brought up have anything to do with the topic at hand, or is it merely clouding the issue?
It is sa

d how many passive Catholic Christians there are out there ready to absorb what ever is placed before them on screen, in book, or even by ill-informed or ill-intentioned friends, preachers, and evangelizers. Knowledge, wisdom, and understanding are gifts that do not develop on their own; they must be exercised like muscles to grow strong. That is why we are called to meditate, contemplate, to THINK, to be aware, awake, and involved. These are not just nice thoughts, but our calling.
Posted by Fr. V at 6:46:00 AM

DUDE!!! you SAY!!!
It is sad how many passive Catholic Christians there are out there ready to absorb what ever is placed before them on screen, in book, or even by ill-informed or ill-intentioned friends, preachers, and evangelizers.
MY RESPONSE. IS .. BINGO!!!! RIGHT ON . TOTALLY TWO THUMBS UP!!! IVE BEEN SAYING THAT FOR YEARS, [ only not quite as eloquent]
YOU THEN SAY....
Knowledge, wisdom, and understanding are gifts that do not develop on their own; they must be exercised like muscles to grow strong. That is why we are called to meditate, contemplate, to THINK, to be aware, awake, and involved. These are not just nice thoughts, but our calling
I SAY. YES. TOTALLY AGREE. BUT LOOK HOW MANY YEARS IF NOT CENTURIES HAVE PASSED WHERE THE "CALLING" WAS OVERTAKEN WITH EGO SELF IMPORTANCE AND BASIC GREED.. . AND HUNDREDS AND THOUSANDS OF PEOPLE SUFFERED. . DUDE!!!!!!!
YOU HAVE A LOT OF WORK CUT OUT FOR YOU TO CORRECT THE PAST THAT SHAPED HISTORY BY A FEW IGNORANT PEOPLE IN YOUR PROFESSION... !!!!! THIS IS REALLY WHERE DIVINE INTERVENTION HOPEFULLY WILL REIGN UPON YOU . !!!! TAINT NO EASY TASK. GO DUDE!!!!!:) TELL IT LIKE IT IS...

so, may i assume the caps were intended for LOUD emphasis?

i'm with you and the dear padre - we MUST think and give due consideration to what is being presented to us.

and then there is the prayerfully received gift of faith. obviously perceptions are not necessarily 'truth'... although, by accident and chance, we may stumble across it occasionally.

so, to prevent a hap-hazard approach, we MUST use our G-d given brains and think.

and the prayer of a righteous man will be honored ... we will be responded to and we will learn to recognize the voice that speaks to our heart and takes us in the direction of 'truth'.

dear JIM
the CAPS is how i seperate and place the conversation when i quote. if I wasnt quoteing something i would use LOWER case. or italic. it can be DONE but i dont know how.[ the ITALIC} and also it is EASIER for me to READ and convey.
its that simple.. thats ALL it is.
if it bothers you
DONT READ IT!!!!!!!![ easy huh]????. its the way i express meself. its not YOU its ME!!!!!!
got it????
its not LOUD. [ thats SOOOOOOOOO cyber chic"] tis a seperation from "lower" CASE to "UPPER" CASE. thats ALL it is.
so lighten up. . thanks
:)

Speaking of truth...I just tried your link to the Catholic Educator's Resource Center. Outstanding! All the world's problems addressed in one place. I could probably get by on this site alone...and maybe one other.