Today's guest blogger is 13 year old David Beatty of St. Sebastian who gave this presentation when we unveiled the new icon of St. Sebastian written by Sr. Iliana of Christ the Bridegroom Monastery, in Burton, OH, to help us celebrate our 90th anniversary:

The Creation and Spirituality of Icons 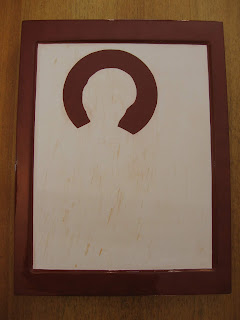 The panel is traditionally of wood. Plywood or MDF (medium density fibre board) is often used as cheaper options, especially for large panels, but the longevity of these as a support is unknown. We know that icons on wood have survived many centuries but MDF and plywood are inventions of the twentieth century so only time will tell. The board is sized with an animal based glue and allowed to dry.
The Ground
This is made of gesso, which is the Italian word for gypsum, or calcium sulphate. The gesso is made by mixing the gypsum, or whiting powder, in an animal based glue such as rabbit skin glue or gelatin. Several coats of gesso are then applied with a brush and allowed to dry between coats. Usually at least 8 coats of gesso are needed to make a good ground.
The ground is then smoothed with an abrasive paper or scraper. The resulting surface is white and smooth and is the only suitable surface for painting in egg tempera.
The Drawing
A line drawing is made of the icon to be painted and this is transferred to the gessoed panel by coating the back of the drawing with a powder pigment and tracing with a suitable instrument. The drawing is then brushed over with ink to make it more stable for painting.
The Gilding 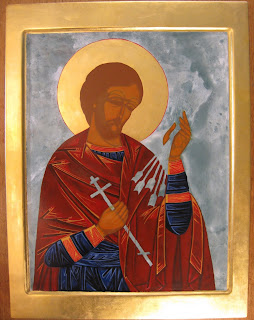 Usually the haloes and (if required) the background are then gilded. This may be oil gilded (using transfer gold) or water gilded using layers of bole (a type of red clay) and gold leaf. In either case real gold is used. Water gilding allows tooling (embossing) of the gold and finishing with olipha. If oil gilding is used then the icon may be finished with shellac or a proprietary varnish.
The Painting
The icon is painted with pure powdered pigments, mainly earth colours, which are mixed (tempered) with egg yolk. The dark colours are painted first and then the lighter colours are added. Any very small gold details are then added. Finally the face and hands are painted – this brings the whole icon to life.
Finishing
The icon is then allowed to dry for a few weeks and is then be coated with a varnish for protection. The varnish is usually olipha, which is a mixture of refined linseed oil and stand oil. 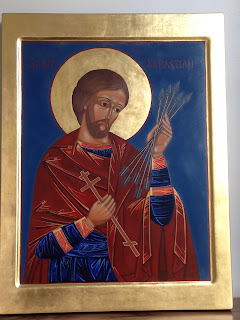 An icon can be viewed as just a piece of art or it can be viewed as a spiritual work of grace created for the glory of God. The simple creation of an icon is not complete without constant prayer during the creation and finishing of an icon. It’s not just art and it should be viewed as such; a symbol of love for our lord.
Icons have had a place in Christian worship as early as we can establish. In the broader sense, icons may be found in basic wall paintings, graffiti of crosses and symbols on ancient tombs, to magnificent frescos, icons and stained glass windows in churches and cathedrals.
“In the beginning was the Word,” wrote St John. “He is the image [ikon in Greek] of the invisible God, the firstborn of all creation,” wrote St. Paul. We meet him still in both word and image. Icons may be beautiful, but they do not exist just to add a little color or a special atmosphere to the rooms they happen to be in. They’re there to help us pray. An icon that isn’t being used in prayer is like a musical instrument not being played or a cookbook that never gives birth to a meal.
Praying before an Icon is just the same as praying before anything else like a crucifix or an altar. Although with the icon the preferred position of prayer is known as the Orant. This is to expose your body in heart mind and soul to the spirituality of the icon. 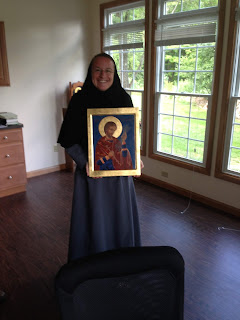 No icon is ever prayed the same way. As the icon is created different prayers are used specific to what the icon is an image of. The wood base is used to symbolize the cross and crucifixion of our Lord, the simple earthly colors display the pain and plainness during the time he was dead, and the gold symbolizes his glorious resurrection.
No less than the written

word, an icon is an instrument for the transmission of Christian tradition and faith. Through sacred imagery, the Holy Spirit speaks to the believer, revealing truths that may not be evident to those using only the tools of reason. And this is one of the most important aspects of the spirituality of icons, that they teach us that dogma, which is the revealed knowledge of God, is first and foremost beautiful. The icon gives us the sight of the saints, and reveals Christian dogma, such as the Trinity and the Incarnation, as being extremely beautiful. 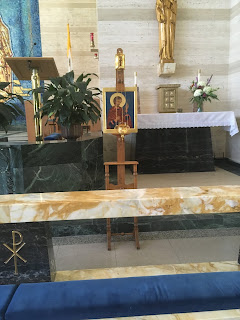 The ecumenical council of 787 AD stated that the Icon was equal with Scripture, since it instructs with shape and colour in the same way as Scripture with words. Thus, icons do not simply attempt to instruct us about the life of Christ or the saints depicted, but they instruct us in the Theology of the Church. And the eyes, posture, colour and gesture come together to point to Theological truths.
The spirituality of icons also results from the fact that the icon is silent. No mouths are open, nor are there any other physical details which suggest sound. But the silence is not empty. St Ignatius, bishop of Antioch, made the comment: “He who possesses in truth the word of Jesus, can hear even its silence.”

The above was prepared for St. Sebastian Parish by Mr. David Beatty, age 13, for the dedication of the 90th anniversary St. Sebastian icon.
Posted by Fr. V at 6:42:00 AM