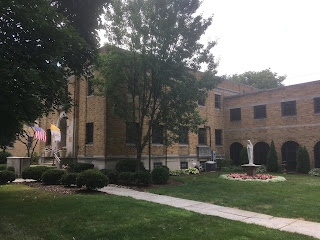 After an hour or so of chatting, Father asked me if I wouldn’t like a tour of the house in which I was to take ups residence in two weeks.  My enthusiasm must have shown through at the offer.  Until this very day I was officially not even allowed to drive past the parish.  Until everything had been worked out officially and all proper personages informed in proper order, I was to keep well away so as to not let the cat out of the bag before those most affected would know who the new pastor would be.

But today the cat was allowed to roam about freely.  The rectory, which was nearly empty when I arrived filled with people.  With our meeting finished, it was time to greet the world openly.  We walked out of his suite into a dark hallway made gloomy by a wall that had been constructed to separate his room from offices that had slowly taken over the rest of the bedroom floor.  A sign on the door in this wall read, “KEEP OUT!  PRIEST’S SLEEPING QUARTERS!”

The remaining suites on this floor and the two guest rooms were offices containing busily working employees; the music director and her assistant, the Director of Religious Education and the liturgical coordinator.  They greeted me warmly and showed me about the rooms.

The suites were very nice if not somewhat small.  Each c


onsisted of a dorm sized sitting room with a fireplace and built in bookcases.  The bedrooms themselves were even tinier, but as my dad would say, “All you do is sleep in there anyway.”  Each suite also had a private bathroom decorated in a different color of Victrolite, an opaque pigmented glass manufactured by Pilkington Brothers in the United Kingdom.  The floors had correspondingly matched tile floors of different designs.  Despite the number of bathrooms in the house being more than there were on the whole block where I grew up, there were only two bathtubs, one for the pastor, and one for the live-ins.  Everyone else did with showers.  If truth be told, they probably did make better offices than bedrooms. 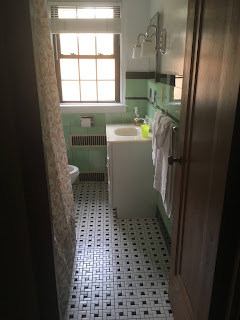 The tour continued down the steps after passing through a door in another retrofitted wall that had been constructed at the top of the stairs when the rash of offices had spread deeper into the house.  The addition of these walls dividing up the house made it darker and seemingly more confusing and larger than it actually was.

A half flight of stairs brought us to the landing of the west wing of the house which consisted of two large suites and some storage closets.  Parish history tells us that this part of the building was a later addition built on to the house for the founding pastor’s sister who also acted as major duomo in her day.  The quality of the construction is not quite what the rest of the house is, but it was very serviceable.  The rooms lacked the fireplaces, built in shelving and tile work of the original house, but the rooms were larger and best of all: air-conditioned.

Ensconced in these rooms now were the business manager, the development director, and a couple of bookkeepers.  The rooms were large enough to hold conferences and meetings and, on the weekends, the Sunday collection was counted on the large table in the development director’s offices.  Prior to them becoming offices at least one pastor had lived in these rooms forsaking the pastor’s suite to the pastor emeritus, Monsignor Zwisler, who still lived in residence at the time of his retirement. 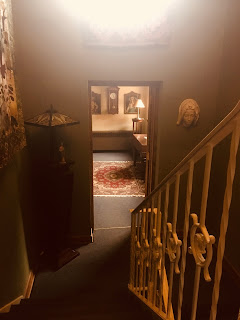 The original occupant of these rooms was the founding pastor’s sister, Marie Zwisler.  A quick story might shed some light on her personality.  It is one of the more famous rectory stories in the diocese and used to be told regularly by diocesan historian Fr. Thomas Tift as part of his History of the Diocese class at the seminary.  On a very cold day, one of the associates started his car in the garages that were right underneath the rooms occupied by Monsignor’s sister.  Wanting to give his car a chance to warm up he let it idle and dashed over to the school for a little while only to find police officers at his garage upon returning.  Marie, whose room was over the garages, accused him of trying to murder her by letting his car run.

As we walked around, the rest of the house revealed a similar fate.  On every floor there were former living spaces that had now been turned into working space.  In the basement was the deacon’s office.  It too may have been air conditioned but there was nothing else unbasementy about it.  Large cement blocks made up his walls and pipes ran across the ceiling.  Apparently a number of people made use of the shelving that ran across his walls making the room half storage, half deacon’s office.

On the main floor was the secretary’s office, the volunteer’s office, the pastoral assistant’s office which took up the entire live-in’s suite, the copy room, and pastor’s office which once served as the living room.  It was all nice and efficient, close, and very communal.  And there was no way I would be able to live like this.
Posted by Fr. V at 8:32:00 AM