Today there begins a new series.  I wrote these notes on the history of the St. Sebastian rectory some time ago.  There are rooms in the rectory that nobody knows any stories about and there are almost no pictures of what the interior of the house looked like originally.  (We have a glimpse of what the curtains might have looked like from a picture of a wedding that took place in the rectory during WWII and that's about it.)   So as a hobby like project I started writing down these musings concerning the rectory.  I hope that you enjoy.

The house to which I was being introduced had been built for me about two and a half decades before I was born.  Well, it is a bit much to say that it was built for me, but rather, men like me.  The Catholics of West Akron sacrificed and overcame nay sayers and built this sturdy rectory about ten years after their parish of St. Sebastian was founded, in the hopes that a priest would always live among them and minister to the community,

About two weeks previously to this, I received a call from the Bishop’s office asking if I would  consider becoming the next pastor of St. Sebastian in Akron.  I had never even heard of the parish before and request the opportunity to go have a look at the place first, to which I was giving a resounding, “No!”  Furthermore (for various and good reasons) there was a directive forbidding me to set foot anywhere near the grounds until more official decisions had been made and the necessary people informed.  This of course meant a disguise of sorts would have to be donned and a drive to Akron taken.  But that was two weeks ago, I had since been named administrator and I was able to visit the parish openly.

The current resident of the rectory and pastor of the parish, the Rev. William Karg, took me to his sitting room on the second floor of the house.  Fr. Karg is a gracious but eminently practical, German man and the room was set up for efficiency, with filing cabinets and folding banquet tables and an eye toward getting work done.  Despite this, the attractiveness of the room shone through.  With bumpy, heavily plastered walls and candle sconces, the pastor’s suite is the most true to the building's Mission Revival architecture.  It is not the grandest room in the world, not even among its peers in rectory architecture, but to me, a poor Barberton boy, it was splendid. 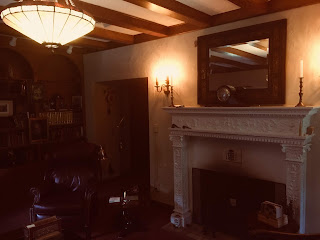 Barberton, the Magic City, is a smaller city nestled against Akron; a fiercely independent relative of sorts.  My father built the house in which I grew up in Barberton’s north west neighborhood near Sacred Heart Slovenian Parish.  He chose a do-it-yourself kit out of a catalogue to build in the 1950s.  We have a picture of him picking up the pieces of the house off of a freight train to be hauled to, what was then, a tree filled lot on a dusty road.  The joists in the attic still have markings on them giving instructions exactly where they were to be placed.  In the catalogue (which we still have) the house is given the grand name, "The Belleview" though it is a very modest home.

As the story goes, after changing their minds about moving to southern California (Dad had discovered snow skiing), Mom and Dad and my two older sisters decided to settle down in Barberton where most of the rest of the family lived, buy a piece of land, and build a house.  Mother was rather flexible in her requirements.  As long as she got a dining room and a front porch she would be happy.  Of course the house that was built has no dining room and only an undersized stoop just about large enough for one standing person and a freshly delivered newspaper to inhabit simultaneously.  This was because Dad was enamored with the floor plan of "The Belleview" which had eleven corners.  It was going to be a challenge to build and that appealed to his adventurous spirit. 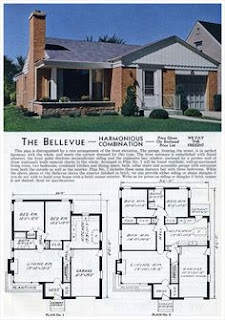 I think a lot of my father for giving the whole thing a go.  He was not a trained carpenter, roofer, plumber, or electrician (which we found out in spades after his death when we had the house inspected) but he had lots of self-esteem and energy and he built something that kept the family warm and dry for over fifty years.  That's not to say that it isn't without its quirks.  Much of the woodwork does not quite line up, the occasional hot and cold water faucets are reversed from those that most of the rest of the civilized world enjoys, and there are many features of the house that come with the paternal instruction, "All you have to do is . . ." as in, "The door's fine.  All you have to do to shut it is lift up the whole door by the handle and lean into it with your shoulder and it will close properly."


My father also did not believe in having things fixed.  He was sure that the world was out to swindle him out of his hard earned wages and so would "fix" things himself.  (Notice the quotation marks.)  Once, when the clothes dryer stopped tumbling Mom came upstairs and proclaimed that she had had it, the dryer was truly dead and that it was finally time to replace the forty year old beast.  Proclaiming that he could fix it Dad went into the basement and after some banging, cursing, and a run or two to the hardware store, emerged from the basement to announce that the darn thing had been resurrected.  "All you have to do to get it going is keep your hand on the start button, push the tumbler to start it spinning with the other and slam the door shut quickly with your knee.”  This was not met with the joy, awe, and gratitude he had expected and from that day forward, if any "fix" was accompanied by the sentence, "All you have to do is . . ." it was no longer deemed by Mom as fixed by any means.  Dad having to start the dryer every time it was now needed, a new one miraculously appeared in the basement.

Previous "repairs" that were still operating under the "All you have to do is" mandate were grandfathered in.  For example, the basement would flood if more than two loads of laundry were washed in any given 24 hour period.  The fix for this was in the form of a large squeegee, a half round rubber dam on a long stick that would enable the offending launderer to steer errant water into other available drains.  Years later when my sister purchased the house (only she and God know why) we called in a plumber to fix the basement drains.  It cost $30. 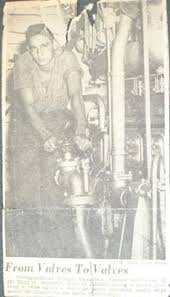 "THIRTY DOLLARS!?" I exclaimed, the heat rising in my ears.

I interrupted him.  He was on the wrong track entirely.  "No.  YOU don't understand.  If I had known this would only cost $30 dollars I would have taken it out of my allowance and snuck you in here when I was twelve instead squeegeeing the basement for an hour every week for thirty years!"

The point is that I did not grow up in Downton Abbey, neither as an heir apparent nor the footman.  So in comparison with the lifestyle to which I had been accustomed, the pastor's sitting room in the St. Sebastian Rectory was swell indeed.

Not that even I wouldn't notice that it needed some help.  Not much, but some.  The whole house seemed to be an apology for being such a nice rectory and the pastor's sitting room was no exception.  I respect the former pastor as a very holy, loving, and intelligent man.  He was always mindful of the limited means of his parishioners at his previous assignment and desired to live no better off than they, though he could.  It was a mentality that he forwarded to his tenure at St. Sebastian.  The house was reduced to German efficiency and very little was allowed by way of ornamentation or excess comfort.  The house, once consisting of six suites, two guest rooms, and live-in quarters, now only had three suites left to living purposes.  To step our of your room meant you had to be dressed and presentable even if all you wanted was to run downstairs and get a glass of water.  Every other space had been turned into offices or meeting spaces.  The basement, the two floors of the main house, the west wing all contained metal desks and filing cabinets, ailing office plants, inspirational posters, staff’s family portraits, and worst of all: people.a
Posted by Fr. V at 7:00:00 AM

I had no idea that hot/cold faucets had standard placements. Grandpa built several houses in mom's hometown, without using a kit. He finished my parents' basement so the hot and cold in the laundry room were reversed. Isn't that normal?

You are a very entertaining writer, Father V.

As a child I remember the rectory being a somewhat scary place. My Mother would bring us there when 1 of the 4 of us made our First Holy Communion and received little statues of the saints that she wanted blessed by a Priest. It was nice to walk in there recently to be greeted by a priest with a smile and two puppies. A much warmer, human atmosphere indeed.