So last week found me at the Jesuit Retreat House in Parma with these fine, young, transitional deacons: 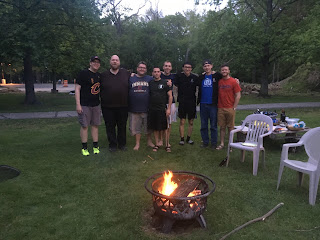 They were on their final retreat before being ordained to the priesthood for service to the Diocese of Cleveland and I was fortunate enough to be their retreat master.  I was recalling the day of my ordination (18 years ago - when did that happen?) and what a beautiful day it was.  When ordination is about to begin and the weather is nice (which it mostly is) we all go out of the old chancery building and line up on the sidewalk in order to process around the outside of the cathedral and enter in through the main doors.  It is alway a sight to see.

The only people who do not line up along the sidewalk are those who have instrumental roles that day.  So, for example, the bishops, the pastors of the ordinandi, and, of course, the ordinandi themselves.  They line up "under the arch."  The arch is a piece of architecture that connects the cathedral rectory to the old chancery building the first floor of which is a giant stone arch (did you see that coming?) with an ornate iron gate.

I tried to draw you a picture but it may just confuse you more: 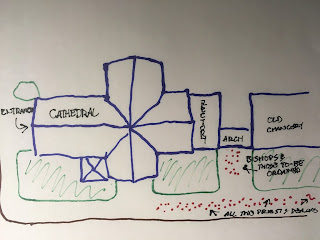 It is something when, after so many years of watching others line up there on their ordination day to finally be in the class that lines up in this special place. 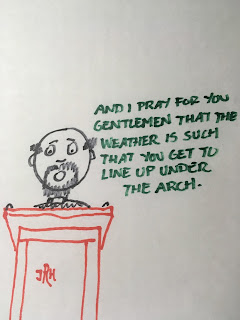 And it was!  Not perfect, but it was!  Fifteen minutes before the ceremony was to begin, we were all called to make our way outside and line up along the side walk.  And there they were, those about to be ordained, lined up under the arch looking excited and radiating holiness. 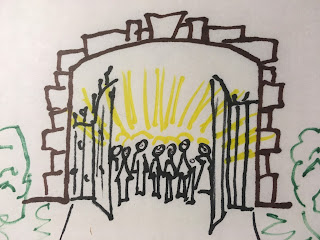 So my prayer and wish for them came true and I was very grateful.

And then this happened: 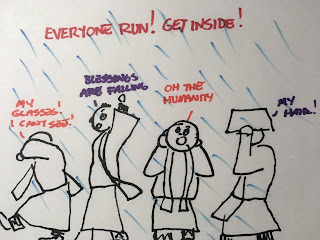 So I guess technically I did get that for which I prayed. 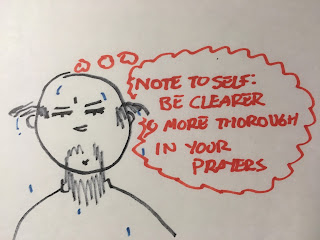 ... My Mass of Consecration as a "Consecrated Virgin living in the World" was celebrated by Bishop Lennon in his private chapel in the rectory. On that day, the bishop and the Delegate for Religious instructed me to rendezvous with them under the arch. Then the bishop and the three priests (who concelebrated) met with me upstairs within the arch prior to the start of the Mass.

So, look out, St. Louis, because we have our own "Gateway Arch" here in the Diocese of Cleveland!

The one who said, "My glasses! I can't see!"
Is that me? I remember being by you and saying something like that as we were running through the rain. Did I make another faceless cameo in your comic?