I was perfectly happy living in my barely 20th century world but like Eve in the Garden of Eden, I was tempted and Oh! I bit into that apple - or is it Apple? 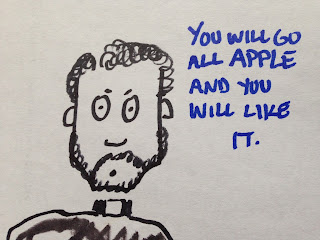 Ah yes, so tempting it was!  For so long I was Appless without shame but then I saw that the fruit was good and tempting to the eye and useful for knowledge.  So slowly, every so slowly I gave myself over and for so long it was good. 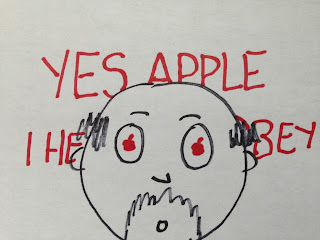 It was largely secret.  I had a reputation to uphold so when my friends came over I hid my Apple self because I was afraid.  But eventually I was won over by the dark side.  "Write your homily on your computer," I was told.  "You can edit much more easily and store them forever."  And I was as anxious to do this as David was to number his people.  Thusly was my homily written and then - AND THEN!  OH!  The HORROR - the Internet at St. Sebastian went dark!  I pressed "print" and NOTHING HAPPENED.  It was almost time for Mass to start and I couldn't put my computer on the ambo.  Or could I? 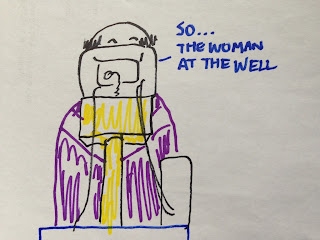 The trials of that Sunday morning having passed, I thought to watch a little TV and relax. 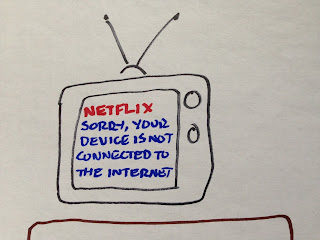 ARG!  The T.V. too is reliant on the Internet.  So I thought to read a book on my Kindle. 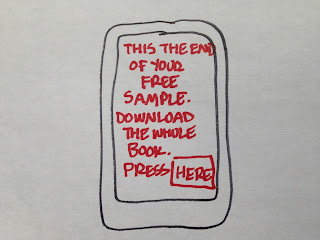 How far I had fallen!  Having finished a book I downloaded some samples thinking that if one of the books intrigued me I would download the rest of it and have something to read Sunday night.  But I was banished from the electronic garden of books to crawl in despair on my belly.

At least I could do my prayers.

WHICH I NORMALLY DO ON MY IPAD 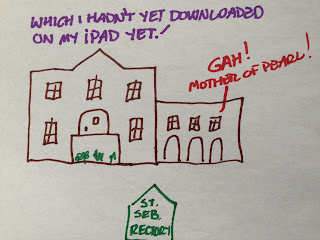 This is why I love young people. At your request, I will bring over to your rectory a few items called, "Books, paper, pencils" I will gladly teach you to use them.

I have been instructed that it is acceptable to curse inanimate objects like computers.
It is OK to say to them, "You are stupid and ugly and your motherboard does not love you." Never day anything like that to a living object, but computers are fair game.

Stephen, what happened to providing accordions to those hellbound?

Unfortunately, I can relate to so much of this. Especially the tv not working when the internet or the Apple devices decide not to communicate. I become painfully aware of how little I know about technology every time things stop working when my husband is on a business trip. Thankfully, the kids are getting to a point where they're savvy enough to know how to fix the stuff.

This is why you should pray on your iPhone instead of your iPad. Even if your internet dies, your phone can still download your office via your data plan.