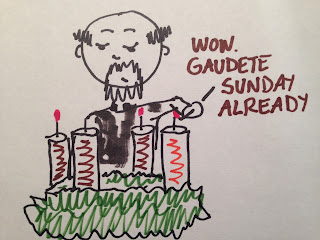 This Advent is going by so quickly!  And it's not the, "Oh! There is so much work to do," kind of quickly (though there is.)  It's the, "It just doesn't feel like Christmas is around the corner" kind of quickly.  It will be here and I won't be ready.

I will admit I am usually the one fighting off Christmas and pushing for Advent.  It is always an amusing but fruitless endeavor.  It is not one you really expect to win.  It is just fought on principle. 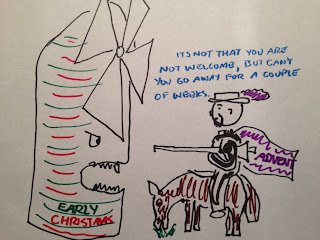 But lots of weird things happened this year.  One of my close friends (and one of the reasons I fight so hard against unseasonable Christmases) moved to Washington state.  He starts playing Christmas music three days after Easter.  I'm sure his Christmas tree has been up for months and has already had more than his fair share of eggnog.  And for some reason, it seems that the Christmas music in stores is toned down a little bit.  I don't feel like it's being forced into my brain hypodermically.  And people just seem un-stressed.  Maybe its this terrible weather.

Every day I wake up, it's another beautiful day.  We have saved a TON of money on plowing, heating, salting, and cleaning.  I can't stand it. 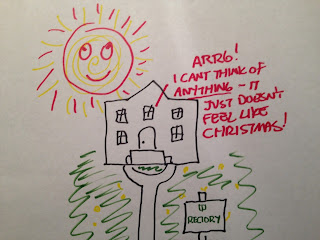 It's playing with my brain.  I just can't get into writing my Christmas homilies - and I have the rhyming homily this year! 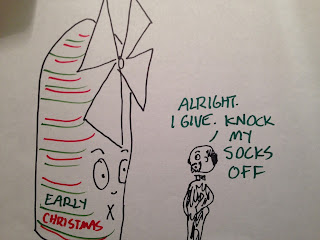 I agree, Father. Isn't the weather odd? It feels like December in Georgia. I have to admit, this is fine by me. As I recall, when my husband had knee surgery the first week of March this year, we had 4" of ice in the driveway and several inches of snow. And I am past the age of being disappointed if we do not have snow on Christmas. Really, I am ok with it.

I am with you on the rest, though. I am so sick of hearing "Jingle Bell Rock", "I Want a Hippopotamus for Christmas", "Rocking Around the Christmas Tree" and "Happy Christmas, War is Over" on the radio. I like good Christmas music, but enough already with the tackier, secular, depressing music.

On the up side, on one of the vintage TV stations yesterday, they were airing the old Christmas specials from the 50s, 60s and 70s - Andy Williams, Judy Garland, Perry Como. I especially enjoyed Mr. Como's show. He sang "O Holy Night", and it was a little astonishing in these modern days to see there was absolutely no problem with airing a very faithful, Biblical presentation of the Nativity, with all the animals, costumes, sets, etc. on his show, all on network TV. I believe Mr. Como was a devout Catholic and maintained very wholesome standards in all his productions.

Do you remember the Christmas albums Firestone and Goodyear used to put out in 60s? Those were always a hot item around Akron, and my father always bought one every year. He was a City of Akron plow driver, and he had extra change in his paycheck from working overtime in those snowy, cold winters!

Happy Advent from a cluster neighbor!

"Do you remember the Christmas albums Firestone and Goodyear"

Remember? I still have them!

I am glad I am not the only one who remembers those albums! We kids wore out our rubber company Christmas albums. Sadly, nothing is left of our stash of Firestone and Goodyear Christmas albums. I am sure they were very scratched when my mother threw them out. What I wouldn't give to hear them again!

I worked at Firestone when I got out of high school (1979). The more senior employees said Mrs. Firestone (Mrs. Leonard, I think) loved music, and it was she who thought of the albums. She also convinced her husband to sponsor a national radio program back in the day, "The Voice of Firestone", which featured classical and operatic music. They were good people, and they wanted nice things for us in Akron. The Seiberlings, who ran Goodyear, were also generous and sponsored a lot of projects to build up the community - it was almost a competition with Firestone!

God bless you, and thanks for the happy memories!

Jack and I look forward to hearing your homily from the cantor seats :)