It seems that the Church has a cool name for just about everything. (I mean – come on – who really needs a word like “tintinnabulum” – but aren’t you glad we have it?) A number of years ago Adam’s 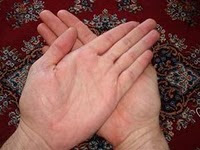 Ale had a post on abuses in the way people receive communion in the hand and their proper Latin terms (see here.) Yesterday while with some priests we discussed the corresponding abuses that occur receiving on the tongue. Those follow. For obvious reasons there are not the same type of pictures that there were for the first post.
Now, of course, the proper way to recieve after bowing and saying, "Amen" is to open wide one's mouth and to seriously stick out one's tongue providing a nice landing runway and amply open hanger doors all the while keeping one's hands folded. (It is amazing how many people stick out their hands and their tongues.) This sends a clear message to the distributor how it is that you wish to recieve and is the safest form of recieving Him on the tongue.

Movingus Targetus: One of the most insidious of all tongue receivers because

of their deceptiveness. All may seem absolutely normal and safe but at the last possible moment when it is too late to duck and swerve the person moves causing their tongue to slide up your finger. It is at times like these that I wish we had never gotten rid of the maniple. Whose idea was that anyway?

ostus Slotus: This is similar to Postus Slotus in the hand. Here, after saying, “Amen” the person barely opens their mouth in order to receive. Maybe it’s modesty I don’t know. And I will admit though I enjoy sports I’ve never been particularly good with aim. We had our International Festival last weekend and while the kids were setting up games they invited me to have a go at throwing been bags through a whole around which a great white shark was painted. BANG – I hit its nose. BANG – I hit its fin. “This is the million dollar throw Father! You can do it! Just one!” BANG – no, actually WOOSH – over the top of the board. Anyway, that is why when someone wants to receive a la Postus Slotus, not matter how careful I am a whack them on the front teeth or on the lips before actually making it in.

Snapus Turtleus: Once again, everything seems absolutely fine and the distributor can

be lulled into a false sense of security. Then, the person leaps forward to snatch the host from your fingers much like a snapping turtle. Once again – maniple anyone?

s Cavimus: Similar to the Postus Slotus but not nearly as dangerous. Here the person opens their mouth wide but fails to stick out their tongue. However it poses little risk for the distributor. One can give them Jesus without fear of hitting teeth or being licked. Kids, remember, this is the one time you can stick your tongue out at an adult and not get in trouble for it so do it!

Guessimus: After saying amen the person simply stands there without giving any indicatio

n whatsoever how they wish to receive. Sometimes it is the case that they person has never received before such as at the wedding and despite the announcement has decided to come up anyway. At times these give themselves away by responding, “Sure” when you say, “Body of Christ.” Other times, not so much.

Usually however it is simply a late bloomer. Slowly move the host toward the person and it is then that they put their hands out or stick out their tongue. They are, in my opinion, the least of the offenders.

Once again, we believe that the Eucharist is the Body and Blood, Soul and Divinity or Our Lord Jesus Christ. Careful and proper reception of this great gift gives honor to God and witness to our brothers and sisters.
Posted by Fr. V at 6:17:00 AM

This is hilarious, and true!

I am not an Extraordinary Minister of Holy Communion (and you may recall my reasons why!), but I do assist in teaching the 1st Communicants themselves HOW to receive. More and more want to receive on the tongue (which is wonderful!) but this year especially I had to offer a bit of coaching!

LOL, I also used your joke...told them it's the only time they can stick their tongues out at someone and not get in trouble! The kids loved that. :-)

Oh, and you know what? I discovered that it's actually EASIER to distribute the host on the tongue than into the hand! Who woulda thunk it?

Let us not forget the priest or EMHC who put their whole fist in the persons mouth either....what would they be called?
I have had on try to shove it down my throat and had this not been communion time, they would have been bitten. Just saying.
It is wonderful when you do meet a priest or EMHC who knows what they are doing, and slaps it on the tongue like a poker chip...

I normally receive Communion on the tongue, and have found that if I'm receiving from a priest, he is trained to look at the hands and mouth. But if I'm receiving from an EMHC, they instinctively look at the hands. I've had several people attempt to put the host in my hands, which are clearly folded while my mouth is open and tongue out. I now keep my hands flat together at my chest, as opposed to folded and at my waist. This seems to visually give an indication to the EMHC and priest that I wish to receive on the tongue.

Why is it we are so aware of the Host but pass the Cup(if not recieving) without a bow or nod as if it is not even there?

If you really want to know the history of the hand-stand movement read Michael Davies "Cranmer's Godly Order" It's a real eye-opener.