While I was a away recently I had the particular joy of visiting the oratory at Ave Maria University. Its location itself is quite a thing to experience. One drives for quit 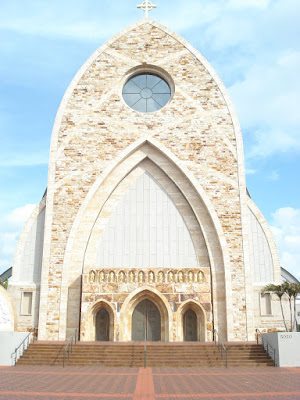 e awhile past nothing but tomato farms before coming across a grand stone sign with a water fall about it that proclaims in an astonishing new and clean sign, "Ave Maria University."
But the drive is not done yet. One crosses a bridge and drives a bit down fine streets with manicured flora before hitting the first bit of real town life sprouting up out of the tomato fields. Like any town first you hit fine modest homes, then passing out of strictly neighborhoods one starts to see the university buildings and then a lively but small downtown. At the heart of all of it is the Ave Maria Oratory. It stands majestic and proudly surrounded by what some day is hoped to be a thriving metropolis.

Long time readers no I have little tolerance for so called modern architecture which accomplishes little but making our churches look like airport terminals or modern art museums on the outside and living rooms on the inside. Every once in a while though something new and interesting will appear on the Catholic radar screen however.

Ave Maria takes the best elements of traditional church architecture and combines them with new ideas and materials. One of the most exciting, I believe, is the use of steel beams something that I always have thought of doing. Instead of hiding them they are displayed in an artistic way - they are celebrated! They are not used simply to support a building that is had a thin facade of another style of architecture.

Amazingly there are no stained glass windows and one does not miss them. The oratory is lit by somewhat obscured windows that allow light to filter in and give a warm glow to the structure. Because the building is supported by exterior beams (another idea I always had a dream of trying) there are no pillars to obstruct the view (and I like pillars but this is cool.) 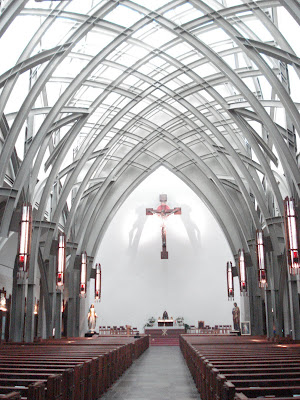 Much of the ornamentation is not yet completed. The apse looks striking bare behind the ornately carved crucifix. Future plans are to greatly enhance this area. There are other elements still missing such as the rose window, the pipe organ, the carving over the front doors and various other projects for which they are currently collecting donations.

The time afforded to be spent looking around the building was short so many advantages and disadvantages of the architecture were probably overlooked. If I were to offer any critique the first would probably be the lack of any real space in the narthax. Then again, the building is in Naples Florida and not north east Ohio and it does have a generous plaza area. Here one approaches the building across a vast paved area the accentuates the building and presents it like a piece of art making it inviting to enter (another thing I find lacking in many "new" churches.) And while the pews are stunningly beautiful, the artwork on the ends are art for art sake rather than having any liturgical decoration. An argument could be made that not every piece of art and architecture needs be religious in a church - it is just my opinion.

The great thing about the building is that it works for where it is. The sunny weather in Naples allows for much light coming in through the slim windows, the warm weather allowing for an outdoor gathering space, and the massive use of steel will contrast well with the landscaping planned. For all of these reasons it probably would not work well in the north where we are cold and lightless much of the year. And the great use of exterior steel in an over developed part of town would not be unique and interesting but an addition to the coldness and drabness of the area. 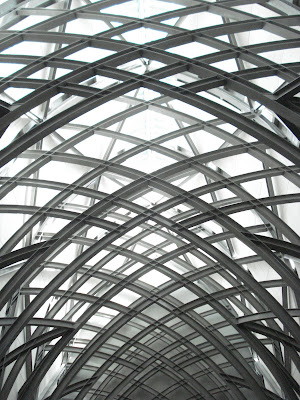 Not only do you need a good building you need it in the right place. In Akron we have a couple of examples of great architecture in the wrong place. E. J. Thomas Hall is a stunning building (though lacking a grand entrance that is actually used.) But it and its environs are built entirely of cement. It in turn is surrounded by railroad tracks and industrial like buildings and parking lots (though its lot has more recently improved) and instead of rising like the monument it should it gives a cold (or in the summer hot) continuation of the drabness around it. The new museum is the same. It is a great building made entirely of glass. But inside what do you have to look at? A parking deck.
I hope you get the chance to see this building - but nobody will accidentally find themselves there. Unless you purposefully decide to go to Ave Maria there is little chance you might inadvertantly stumble upon it some day. But if you are looking for a school or happen to be in Naples for some reason (or if you are planning on building a church) pop by.
Posted by Fr. V at 10:37:00 AM

And to think that the finest church architecturally in the Akron area is being shut down by order of the bishop on June 27.

Maybe the Bishop can make more people join that church and support it. Unfortunately, the population in Akron and this church's location do not provide enough parishioners to keep it going. Maybe Akron, in its heyday, should not have started so many churches so (relatively) close to each other. Then, a decrease in population might not have been so catastrophic.

Maybe if people would stop contracepting their children out of existence parishes wouldn't be closing. It's not the fault of the Bishop: the closing of parishes lies DIRECTLY on the shoulders, consciences, and souls of the Catholics themselves.

Fr. V ~ Thanks for the pics. About to graduate with a degree from that University whose grounds I've never touched and whose Oratory I'll probably NEVER have the chance to see in person. Thanks!

I say 'by order of the bishop' because the closing ran contrary to the recommendation of the cluster parishes, one of the very few recommendations the bishop chose not to accept. And the structure is still one of the architecturally finest in the area, which was my primary point anyways.

Any chance of adding me to your links?

Monaghan's Monstrosity is not without its critics. It should be noted that the "Oratory" is a the centerpiece of a privately owned "Catholictown" which has a slight canonical relationship to the diocese in which it is located, but otherwise has little relationship with the global Catholic Church. See:
www.avewatch.com
and
http://avewatch.com/?p=46
for more.

thank god for a priest with information and an opinion that he is willing to share with his lowly little flock---maybe i'm happy about this because i couldn't agree more----where is BEAUTY i these newly constructed churches---i find i need every assit i can get to be "through him' with him, and in him" i.e.that means beautiful music(i'm sorry but "all are welcome" just doesn't quite cut it) coupled with beautiful architecture--etc. i think you get the point---see Father even members of the lowly flock have an opinion---no matter how pitiful--n.

i find i need every ASSIST---sorry about assit---what do you expect from the "lowly's ---good spelling-----p.s.s. i fear i've got a theme going with this lowly thing---not to worry Oh great one--alias Father V---you have always affirmed me---n.--i fear the whole is geeting deeper--i think i better just shut up--n.

Your blog has been recommended to us as a interviewee's favorite blog!

We would like to do an interview with you about your blog for
www.BlogInterviewer.com . We'd like to give you the opportunity to
give us some insight on the "person behind the blog."

It would just take a few minutes of your time. The interview form can
be submitted online at http://bloginterviewer.com/submit-an-interview

Father: Looks beautiful. Maybe I can see it in person one day!