MONDAY DIARY - GOING TO THE DOGS

You know, I was hesitant about getting a rectory dog. In general I don’ 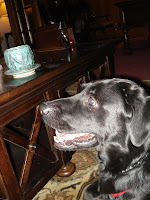 t believe they are appropriate for rectories. There are many stories about dogs not working out so well in such a public place or a new associate coming and not liking or being allergic to dogs and having to give the dog away amidst much sadness by the school kids. So it was a rather rigorous interview that Sebastian (then Roomy) went through. I did want a dog here in this big old house thinking that at best it would be some years before the parish would be assigned a parochial vicar (what did I know – God is ironic) and it would be nice not only have another living presence in the rectory (besides the mice) but some security as well.

Surprisingly enough it turns out that one of his greatest assets is that of being a minister of outreach (I know – that sound cheesy.) He enables people to make contact with me that otherwise might not take place. I suppose this is the same reason guys get dogs and use them as “chick magnets.” There is something inviting about a dog that fosters communication between humans.

For example, there was a young lady riding her bike down the street the other day as we were out for afternoon airing out and she stopped and turned back – not to greet me – but to say hi to Sebastian. After a few moments she introduced herself to me and we talked. She had been wanting to come bac 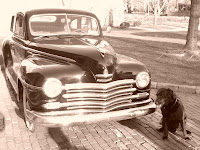 k to Church for some time and wasn’t sure how to go about it and was glad Sebastian provided her the opportunity. He is that safe something to talk about until someone is comfortable enough to say, “So I’ve been thinking about talking to a priest about . . .”

Similar things to this happen constantly. School children come by to check up on him, people bring treats, people stop in the park to pet him and then we get into conversations. I’ve met members of other congregations and we discuss goings on in our places of worship and in our city. I meet fallen away Catholics and provide them with encouragement and direction if they need it. And I meet some cool other dogs – Mia Sophia, Molly, Mattie, Bean, Duke, Ace, and a host of others.

So, I don’t know that I am completely won over to the idea of rectory dogs. I am won over to THIS particular rectory dog – and his mentor Vinnie over at St. Vincent – and am thankful for the ministry he does.
And now that my sister has taught him how to go through the swinging door into the kitchen we have to figure out now to stop coming through it at opposite sides at the same time. That can't be good on the nose.
Posted by Fr. V at 8:29:00 AM

Well this Catholic votes YES for a rectory pet. What a beautiful pup!

Sebastian sounds like a peach. I read a quote the other day, "Dog saliva mends a broken heart." How true. Every Sunday night, I used to help a woman ready her baggie of 5, "only 5, now!" little t-shaped treats for the (nursing home) visiting dog the next morn.. only this lady was "allowed to give him treats!" She'd hide them on the side of her recliner, and the (smallish) dog would always wait for her cue to come find them. Oh, God bless dogs. And their owners. :-)

The Bishop (Vibrant Parish Life) mandates that we evangelize the neighborhood. He sends a pastoral administrator and a parochial vicar. The Lord sends a dog. Sebastian is serving the Lord by acting according to his nature. Mysterious indeed are the ways of the Lord.

I think that you may know that Father Paul Clines had a lot of people who spoke to him when they would seem him and his rectory dogs at St. Augustine in Barberton.

Hi Father, I saw you and Sebastian walk by my house yesterday!