I always have and always will contend that the Catholic Church is never behind the times. She just is SO cutting edge and ahead of the curve and thusly out of people’s perception of modernity that she just SEEMS, from time to time, to be behind. 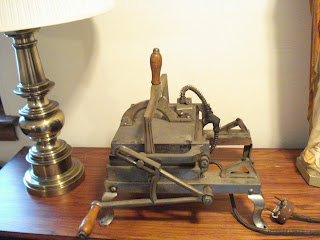 Case in point, I would like to introduce you to the SAINT GEORGE (Foreman) ECCLESIAL GRILL. It was dug up from a church attic. Produced by the Andres Messmer Company of Cincinnati, Ohio (patent pending 1918) this handy little device produced the hosts for Mass. That was when it was very necessary to have Communion patens since the hosts were much more crumbly. Today’s mechanically produced hosts do not seem to create crumbs at all except for those of the most minute variety. 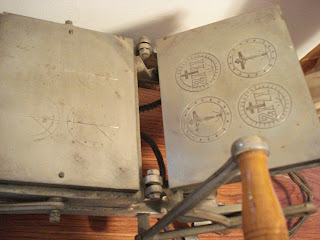 The metal surfaces that you see here heat up, you pour on the “host batter” (which I suppose to be a simple wheat and water mixture), close the top, wait a few moments, open it up and, “Walla!”, you are ready for Mass. (Please let cool before consecrating.)

I saw a parish that had one that was similar to a “hobo pie” maker sitting next the fire place in the rectory. The host mixture was poured onto the form, the top closed over, and then it was thrust into the fire with long handles. (It must have taken forever to get the hang of that – AND they did not have Pam back then!)

Despite how modern we may feel as a society, it would not be for a number of decades before somebody would invent something similar for home making sandwiches and small steaks. And of course as we tend to secularize everything, the dropped the “Saint” from the name and it is now simply known as the George Foreman Grill losing all context from its religious roots.

Email ThisBlogThis!Share to TwitterShare to FacebookShare to Pinterest
Labels: humor

Etymology: French, literally, "see there." Interjection: used to call attention, to express satisfaction or approval, or to suggest an appearance as if by magic.

The suspense is killing me. Are you going to try it out?

That is so cool!

The Host maker looks almost like my old pizzelle maker! I bet it still works too....lets try it some day!! :)
G.

This is a seriously fascinating post. I've never seen that before, nor knew how they were made back in "the day".

Let them cool...LOL! However, I entertain myself with thoughts of some certain "Catholic" politicians who support abortion receiving a hot one when they dare to present themselves for Communion.